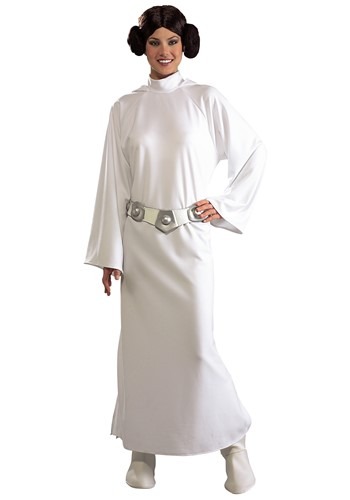 Help me, Obi-Wan Kenobi. You’re my only hope. When a Princess like Leia has to ask for help, you know that the need is absolutely dire. Aboard the Rebel blockade runner she was in charge of protecting the secret plans to the death star and deliver them to the rebel base on Yavin IV (Or was it Dantooine?). But when the Imperial forces capture the ship she knows that it is up to her to give the plans to R2-D2 to take to Obi-Wan Kenobi. She takes care of that and even fights off capture. This gorgeous princess from peaceful Alderaan is strong enough to endure being locked up on the death star, tortured, and watching her home planet be destroyed entirely without giving up any information. The Skywalker boys should be taking notes on how to be more like this lady. Show your inner power lady with this Women’s Princess Leia Costume. With this costumevyou’ll feel like you could stand up to Vader dodge stormtrooper blaster bolts and lead an entire army of rebel soldiers while still keeping your hair in a fantastic double bun (or whatever other styles you choose in the later episodes). This costume works great for a couple (Han and Leia) trio (Han, Leia, and Luke) or really as many people as you want (it’s Star Wars so there are plenty of awesome characters). Be sure to keep your group in line and make sure they know that you’re the one in charge and they’re nothing but a bunch of “half-witted scruffy-looking nerf herders!”