Before you go blending into the background, be sure you’re wearing your Where’s Waldo Hat. Without it, someone may spot you! 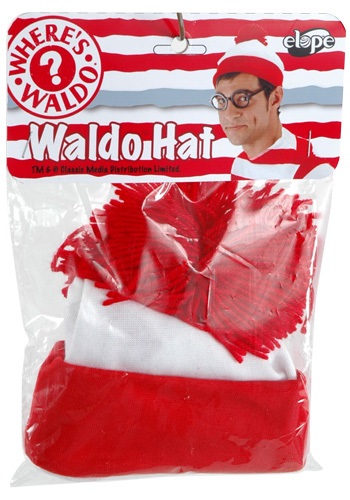 Remember being a kid and having a jolly good time with those puzzle books? Matching one room with another and circling or coloring the differences? Drawing lines between a thousand dots until a mysterious image appeared out of the ether? Such fun! Then, you grow up just a bit and they hand you a new style of puzzle. You stare for eighty-seven hours at the image of a crowded street during a holiday parade. It is filled with seven barber shops, eight Santas, over seven hundred candy canes, and—according to the rules—a single red-and-white clad smiling guy named Waldo. But you know… you know that he’s not there. It’s a giant conspiracy to drive you mad!Well, if you’re like us, you never found Waldo even though your friends promised that they did and they’d point him out eventually—but they never did! And, for that, it is time to bring some tiny fragment of revenge. Well, we never found him in the puzzle books. But, we did find him. And, now, for as long as you would like, you can feel the proof that the jolly hiding man certainly existed. Consider this Where’s Waldo Hat for your collection. A simple red and white cotton hat with a goofy puff ball will never feel so invigorating when you realize it is proof that the man was found. (Ignore all the obvious emphasis on past-tense language, here. Plausible deniability, you know.)