Don’t leave Chewbacca without his most trusted weapon! Get this Star Wars Chewbacca Bowcaster and complete your Chewbacca costume this Halloween. 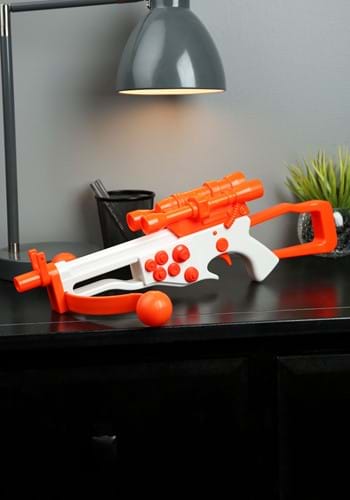 Listen, we can’t just go around selling real bowcasters all willy nilly. If you’ve watched Star Wars: The Force Awakens, then you know why. Both Chewbacca and Han Solo end up shooting the heck out of Stormtroopers and blasting holes in the landscape. And you think we’re just going to hand out fully functioning weapons of moderate destruction like that? No, no, no. That’s a huge liability and it would be downright irresponsible of us to do something like that. Instead, we have these cool toy versions of the iconic Star Wars weapon that you can get!Yes, this Chewbacca bowcaster might not pack the mighty wallop of the real deal from the movies, but it does feel pretty good holding it while loudly shouting, “Pew! Pew! Pew!” Of course, it has bright orange accents to make it quite clear that it’s a toy, but the shape of the accessory is a pretty spot on recreation of Chewie’s signature blaster. So get out there and blast some pretend bad guys with this Wookiee weapon!