This Kids Michael Jackson Thriller Jacket will turn your child into the King of Pop this Halloween. Get it for a great price! 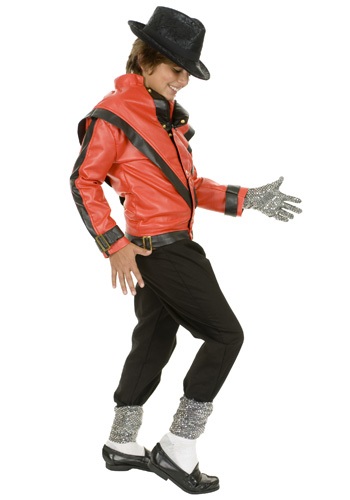 If your kid wants to be the King of Pop, they’re going to need to practice more than their singing chops. If they want the best candy on Halloween, they’ll need to pull off some epic dance moves that will leave everyone awestruck. They’ll also need this licensed Michael Jackson Thriller Jacket, and then they’ll look so good, they’ve got to be BAD!Who doesn’t remember the music video for Michael’s iconic song “Thriller”? Even people who were born long after it came out still get tingles and start to groove when that catchy beat starts playing. It’s a modern masterpiece, and there’s no better way to be a hit at parties than dancing to this classic spooky song, preferably in a big group of pals dressed as zombies all grooving along. But without lots of practice, Michael’s amazing moves are tough to perfectly pull off. After all, nobody is crowned the “King of Pop” by dancing like an amateur!While a simple piece of clothing can’t boost someone’s dancing abilities overnight, this wild jacket will give your kid MJ’s iconic look so they can work on their moves in swanky 80’s style! This officially licensed garment is made of red and black faux leather, and is designed to look just like the iconic jacket the King wears in his music video. Once your little pop star has mastered the Thriller dance, they can work on the Moonwalk, and really rake in the trick-or-treat candy with their slick moves!