The high seas just got a little cuter when your little one sets sail in this Girls Pirate Princess Costume. This is perfect for your young swashbuckler! 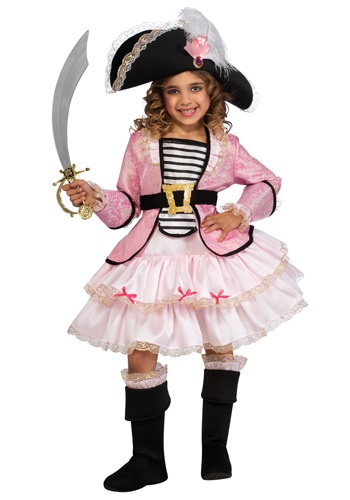 It tends to surprise outsiders just how many rules there are in pirate society. The assumption is that the allure of the open sea and promise of untold riches has called many a young lad and adventurous lass to the Seven Seas where they steal their way onto ships and take whatever they want! Do not be fooled: after all the looting is done and the relaxation is about to begin, they have to return to the secret pirate lair to tell their tales and tithe to the Pirate King!A formidable being who rules over all the pirates of every sea and every depth, the Pirate King has total command over every scalawag and barnbuscle that’s ever put boot to deck. The King cannot be beat when it comes to games of chance, quality of loot, or even in mug-by-mug contests of hot chocolate gulping! “… Wait. Hot… chocolate?” you are no doubt wondering. Indeed! The Pirate King is merely a title taken by whosoever manages to defeat the standing King! And, currently, well… perhaps you should just get to know her a bit better yourself…Introduce yourself to the ruler of the pirates with this Girl’s Pirate Princess costume. This dress is styled as a frock coat over a layered skirt and features the new color of pirate flags, everywhere: pink. Nobody argues with the Pirate King, especially when she’s a precocious princess who can hold her hot cocoa like nobody else! And, when that fails, who can argue with the fantastic black foam bicorn hat with lace edging and wide feather anchored by faux gemstone? Now that is a captain’s hat to be respected! Still, mutiny is possible even on an island, so maybe it is best to pick up a cutlass or two… just in case.