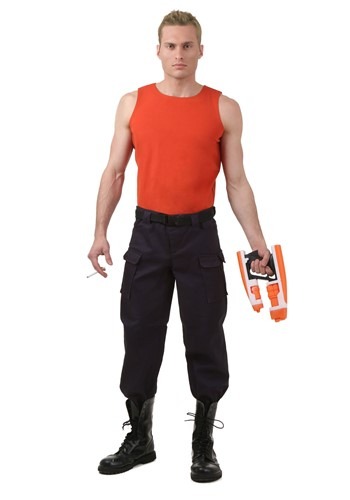 Moolti-pass! Korben Dallas, moolti-pass.How often has this happened to you? You’re driving along in your space taxi, minding your own business, when a woman in what looks like a really bad mummy costume crashes through your roof! Right? And you’re like, hey lady, that’s going to cost you! But it turns out that strangely dressed woman (who has the shock bright orange hair) isn’t a human woman at all, but actually a- hang on, is Leeloo a woman still? Or is she an alien? You know what, doesn’t matter. Leeloo is actually the Fifth Element (oops, spoiler alert there. She’s basically Captain Planet. You get Fire, Earth, Wind, Water and… Leeloo. That’s how you make Captain Planet), the only weapon which can defeat the Great Evil. Makes sense, right? Of course you finally meet this beautiful woman who would be absolutely perfect for you, but she doesn’t speak English (“moolti-pass!”) and on top of that she seems to be wanted by just about everybody on the planet, including these two weird priests. What are you going to tell your mom?Meet your own Leeloo (“moolti-pass!”) when you dress up in your very own Korben Dallas costume. Major Dallas has seen better days, since now he’s living in a shoebox driving a beat-up taxi (especially now with that skylight!), but it’s your chance to take charge again and save the universe while also falling in love with a weapon/alien/god-like power being, who despite her power happens to be absolutely adorable (“moolti-pass!”). Grab the girl, stop Zorg, save the planet, and finally, finally kiss the girl! Easy, right?