Add some dino-power to your next event when you dress someone in this Dinosaur Mascot Costume! 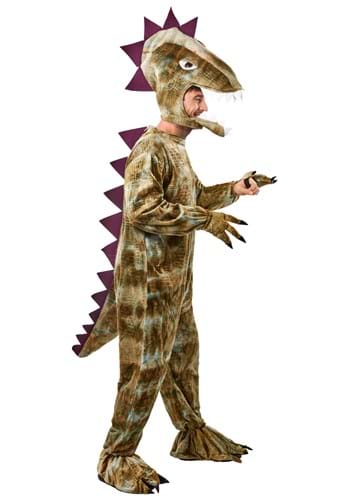 So when was the first time you realized that dinosaurs were awesome? Maybe you were channel surfing and stumbled across some epic dinosaur documentary. It could have been that first time you went on a field trip to the museum and saw their gigantic bones on display. Or it could have been when you saw that giant purple dinosaur sing to the kids about…wait a minute, scratch that. He’s definitely not as cool as the real thing. No, a silly singing kids show dinosaur could never match the insane awesomeness of the real thing. Real dinosaurs could squash you like a bug. Whether they’re flying, running, or stalking their prey for a nice lunch, dinosaurs might be the coolest animal ever.Which makes us wonder…why don’t more professional sports teams call themselves the dinosaurs? They’re all too busy being named after birds or socks or most-likely-offensive-indigenous-people-nicknames to see how amazing it would be to call themselves the dinosaurs. They could play in Jurassic Park! Come on, people, this stuff just markets itself.Chances are, the way professional sports can sometimes move slowly, we won’t see a dinosaur team anytime soon. But that doesn’t have to stop you from imagining what it could be like in this Dinosaur Mascot Costume. It’s a plush, comfortable polyester suit that zips up in back and features purple felt scales down the back and tail, with hand and foot covers to keep you looking your dinosaur-iest. Who knows…maybe a professional team owner might even see you wearing this and get inspired to rename his team? Dare to dream.