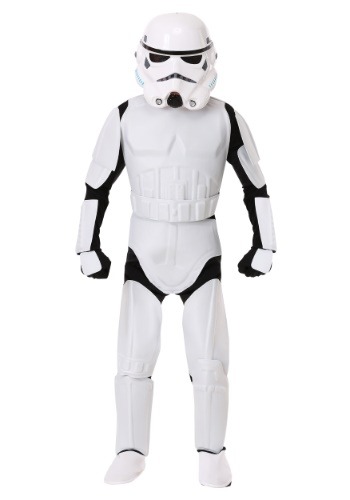 Attention everyone! The Empire is looking for new recruits! Do you have what it takes to fight against the Rebellion and the Jedi? If you think your skills are up to par, then the Empire is looking for you!If you’re someone who wants to see the stars and fly your very own TIE fighter, please report to the nearest spaceport. Once there, get on the spacecraft with the destination Death Star and you can be well on your way to become the latest member of the Empire. Don’t worry, we won’t judge you for wanting to be one of the ‘bad’ guys – everyone dances to the beat of their own drummer. Just because we wouldn’t sign up to destroy the Jedi and everything that’s pure in the universe doesn’t mean other people shouldn’t. Besides, you’re probably one of those well-meaning Stormtroopers, right? Every Stormtrooper needs the proper gear though, so to make sure you have the correct look be sure to pick up this officially licensed Star Wars Stormtrooper costume. The 100% polyester jumpsuit has white rubber armor pieces attached to the front for a classic look out of the original Star Wars films. The attached boot tops are an easy way to get the full look from head to toe without spending a fortune. A matching white rubber belt is also included. Top it off with the two-piece PVC Stormtrooper helmet and you’ll be ready to fight in no time! Just don’t forget to add a blaster to the costume.