Wearing a Child Deluxe Robin Cape will make your little guy look and feel like a DC Comics superhero! 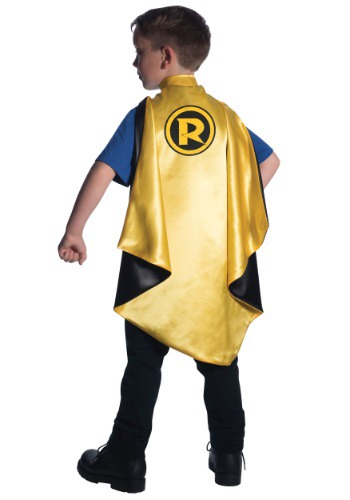 When your kid told you he wanted to dress up as Robin for Halloween, you probably had some questions. Why did he choose Batman’s plucky sidekick instead of going as the Caped Crusader himself? Which Robin did he want to be—Dick Grayson, Jason Todd, Tim Drake, Damian Wayne or Stephanie Brown (hey, we don’t crush dreams here)? And, most importantly, where could you find him the most amazing, costume-completing Robin cape ever to be seen?We can’t answer the first questions for you… Well, not with certainty. We’d guess your kid doesn’t want to be Batman because Batman is a big grouch with no sense of humor, whereas Robin is more colorful, figuratively and literally. And we’d of course suggest Dick Grayson, since he originated the role and is still the standard that all other Robins are judged by. Heck, he’s even held his own as a new Batman when the occasion calls for it. But like we said, we’re just offering opinions.We can answer the third question, though: the Child Deluxe Robin Cape. This officially-licensed cape features a gleaming yellow outer shell with black lining and an embroidered “R” on the back. It easily fastens with a Velcro strap across the neck. And it’s just the thing for your Boy Wonder to don before heading out to stop crime and make the city safer, like the hero he is.