Put your little one in this toddler Bamm-Bamm Rubble costume to give them the look of super-human strength. The perfect Flintstones costume for your baby. 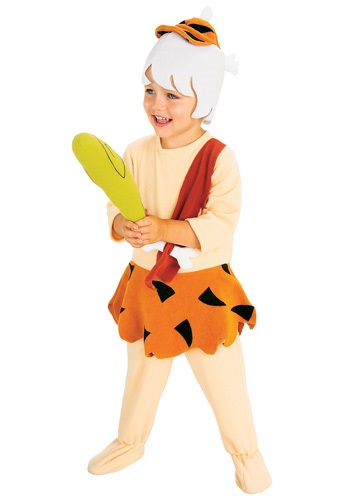 Bamm! BAMM BAMM!Ah, the sounds of a Sunday morning at home. After pancakes and cartoons, your little one loves to rove the homestead, smashing things with a big club. Hmm…that sounds like another toddler we know. Bamm-Bamm, of course, The Flintstones! So, have no fear, it is not you; toddlers wreaking major havoc is a tale as old as time, dating as far back to the prehistoric era of the dinosaurs. He’ll grow out of it, but until then you may as well encourage their true nature to shine and dress your kiddo up in this officially licensed Bamm-Bamm Toddler Costume; if he’s bound to use his strength for destruction, he may as well look super-cute while doing it! Betty and Barney Rubble handled their little mischief-maker by finding him the perfect playmate; maybe your neighbors have a little Pebbles in their house who needs a friend to do everything with, as well? Dress your tiny tot in this fleece jumpsuit with attached orange shorts, and secure the white, cap-topped hairpiece over his noggin, and go knock on their door to find out! Your little cave boy can even do all the banging on the door! And then maybe when that’s over, you can trade in his wooden club for this costume’s plush one; just because you can’t take the bamm! out of the toddler, doesn’t mean you can’t make it a whole lot quieter with the help of this look!