You can become the creepy elephant and donkey creature from American Horror Story: Cult with this flip flop mask. 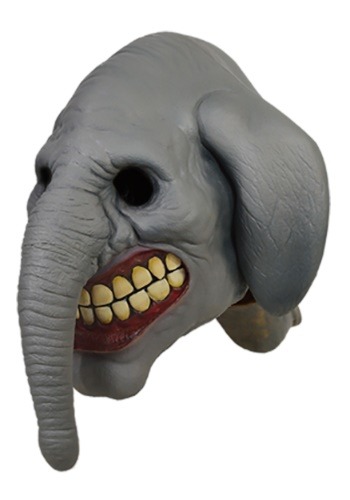 FEAR IS TRUTHYour standing with a pencil in one hand and a ballot in the other—the time has come and now is the moment to exercise your American right to vote. Our nation’s future rests on your shoulders and the very decision you’re about to make. Remember, casting a vote for Jill Stein could cost you your wife and your life. If you know what we’re getting at, then you’ve seen American Horror Story: Cult, the most realistic and (perhaps) scariest season of the popular FX series. Killers clad in clown costumes and enemies cloaked as allies, who can you trust when the fate of the whole country could depend on which bubble you fill in. Democratic or Republican?Here’s one decision that isn’t hard to make: purchasing the AHS Flip Flop mask from the Halloween masterminds at Trick or Treat Studios. Perfectly concealing your identity behind a two-sided mask. Want to reverse your life-altering decision? Just turn the mask around but prepare for the deadly consequences that lie ahead…          PRODUCT DETAILS Officially licensed, the American Horror Story Flip Flop mask is for adults interested in joining Kai Anderson’s cult. This mask features two sides, an elephant representing Republicans and a Donkey representing Democrats, sculpted from the show-used mold!BRING THE BETRAYERSAre you a fan of all the AHS seasons? Browse our wide selection of officially licensed AHS costumes.