Complete your Asylum nun look with this adult mask from American Horror Story. 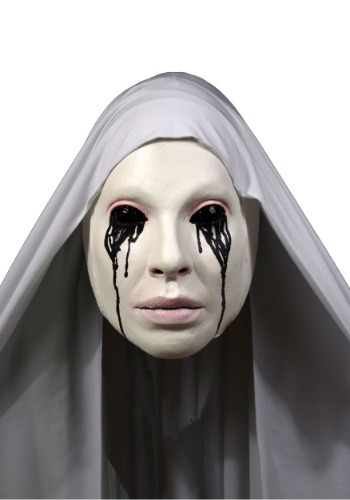 All monsters are human.If you don’t believe us, then you may want to take a walk through Briarcliff. No one is as they seem. Dr. Thredson appears to be a highly educated and trustworthy psychiatrist, but in his spare time he’s a serial killer called Bloody Face who enjoys making masks and lamp shades out of human flesh. The man responsible for medicating the Briarcliff patients, Dr. Arden, is actually turning them into mutants before releasing them into the woods. Sister Mary Eunice may seem sweet but don’t be fooled. She’s been possessed by the devil so she’s basically corrupting everyone and anyone who dares to look in her direction. On second thought… you may not want to take a breezy stroll through the asylum!Instead we urge you to wear this officially licensed American Horror Story nun mask in order to get a taste of the evil lurking inside Briarcliff . Don the mask and transform into the promotional image used to advertise Season 2 of AHS. Don’t worry, we’ll make sure that Sister Mary Eunice says a little prayer for you…