This inflatable gangster machine gun is a fun blow up toy weapon. A great accessory for any gangster Halloween costume at an affordable price. 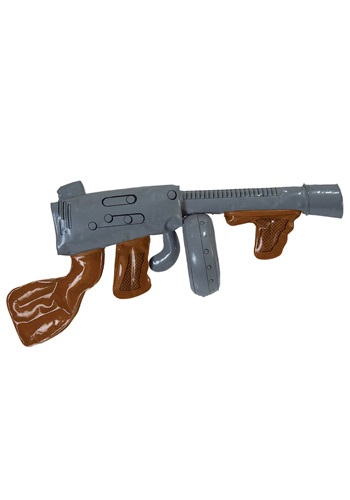 Most people know the iconic firearm of the Prohibition era as a Tommy Gun, although it’s more properly known as a Thompson submachine gun, after its inventor John T. Thompson. “Tommy gun” is far from its only nickname, though, and nowhere near its most colorful. It’s been called a lot of things over the years, including “The Chicago Typewriter,” “The Trench Sweeper,” and, most straightforwardly, “The Annihilator.” The general thrust seems to be that this is a gun that can shoot an awful lot of things in a very short period of time. If you need a lot of things shot quickly, that’s probably about as much as you can ask for.Of course, you’re not going to be shooting anything with this particular Tommy Gun. This fully inflatable firearm is straight out of an old cartoon where all of the gangsters wear brightly colored suits and talk in a bad Edward G. Robinson impression. But that’s OK, you’re only a costume gangster. The mean streets are probably that much safer with your inflatable armory out on patrol. This is probably a much more adorable show of firepower than old John T. Thompson ever imagined, but we’d be no one at the costume party will be complaining about that.

This Massive Mobster Halloween Costume makes you look like you have more brawn than brain–but you know better! 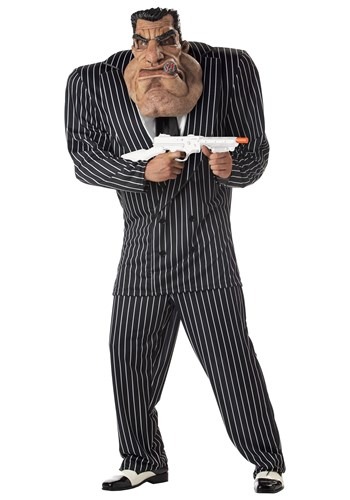 There are some mobsters who are larger than life. The biggest: Alphonse Gabriel “Al” Capone. The booze running mobster of Chicago. The Murder Inc. leader: Bugsy Siegel. This tough guy is not to be confused with martial arts movie star Steven Seagal. No, Bugsy was instrumental in creating Las Vegas the Gambling Capital of the World. And, of course, Public Enemy No. 1: John Dillinger. Bank robber extraordinaire.While these men were large in the media, they were sometimes also large in person. No, we don’t mean that they were chunky, (well some of them weren’t), rather we mean that they were tall, sometimes bulky from either muscle or bone structure. Sometimes they could appear even larger with the pin stripe suits they wore. This made the machine gun toting mobsters even more imposing.If you have ever wanted to know what it would be like to rob a bank in the 30s, or enjoy the media attention that comes from being Public Enemy No. 1, we have just the thing for you. This Massive Mobster Halloween Costume, will make you look just as large as the gangsters of old. Everyone will know what a tough guy you are with the pin stripe suit you’ll be wearing, and they will know you mean it when you say “Stick ’em up! This is a robbery!” Just try not to get caught by the coppers, you wouldn’t want to end up in a federal prison for the rest of your life.