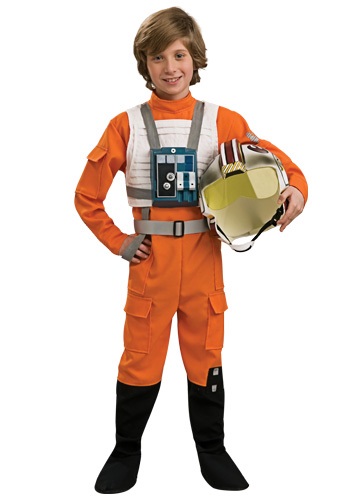 The Rebel Alliance may be a ragtag group of freedom fighters, but what they lack in equipment, they make up for with skill and heart! If your little one wants to fly with the best fighter pilots this side of the Outer Rim, they’ll need this official Star Wars X-Wing Pilot costume. It takes more than a flashy ship to make a good pilot, although a skilled pilot at the controls of something like a T-65 X-Wing fighter can turn the tide of any battle. In order to become that skilled in the first place though, they need quick instincts and nerves of steel (having the Force on their side helps quite a bit, too). Also, if they want to be a hot shot pilot and fly with heroes like Luke Skywalker and Wedge Antilles, they’ll have to dress up like them in their distinctively dashing orange flight suits, which are easily some of the coolest uniforms in the Rebellion! Since this costume is designed after the flight uniforms used in the Star Wars movies, that cool, adventuresome style is perfectly captured by this orange bodysuit. It features built-in boot tops and working pockets for a more authentic feel, while the molded plastic life support chest panel and pilot helmet will have them feeling like they just flew in from a galaxy far, far away. Hopefully, the Empire won’t come snooping around any time soon, but if they do, your little pilot will be ready for action!

Red Five standing by! Your tiny tot will be all set to fly around space in this Toddler X-Wing Fighter Pilot Costume. This costumes goes great in a group of Star Wars outfits. 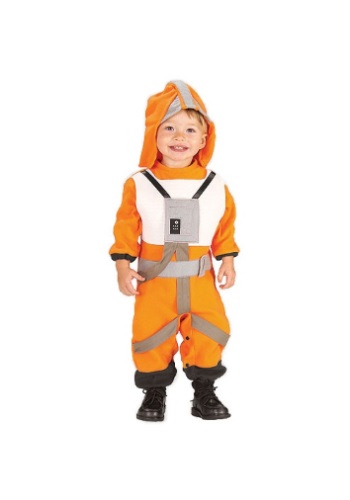 What’s that you say? Your little one is already showing amazing skills at piloting their toy fighter around the living room by using their hands to steer and making jet noises with their mouths?Well, that’s good to hear. The Rebel Alliance is in desperate need of some good pilots. Their pilots kind of have a habit of… disappearing. Especially because the Rebels have a tendency to send out all of their pilots to fight the Empire all the time. That always goes so well for the Rebel pilots.But the fact that your kid is showing promise so early is exciting! Maybe the Rebel Alliance can start recruiting a bit younger! Well, no, of course not that young. That would be silly. We’re talking at least five years old. Then they can start training!If you think your child has what it takes to pilot a ship for the Rebel Alliance, you might as well start testing their skills now. You know, just to be sure. You can try putting them in this Toddler X-Wing Fighter Pilot Costume and see how it goes. It’s an orange romper with a hood, all with details like an actual X-Wing pilot’s suit. If you put your kid in this and their reflexes and coordination are immediately enhanced, there’s a good chance they’re exactly what the Rebel Alliance needs. If they end up sticking their fists in their mouths, falling down, and knocking their toys over… well. We appreciate the interest, but they’re not quite the material the Rebel Alliance is looking for. They can keep the jumpsuit though.