Dress your child up like a funny reptile in this Child Turtle Costume. The versatile costume is perfect for an animal-themed party, or just as his next Halloween costume! 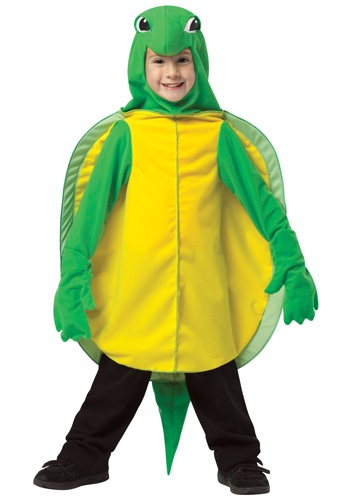 You know, they say that time goes by faster the older that you get, but do you ever wonder what it’s like for a turtle?Because we don’t know if you’ve heard this, but…turtles are pretty slow. Maybe it doesn’t even matter that they can live to be over 100 years old, since everything probably moves fast to them! It’s kind of like when we moved away from our hometown for five years and then came back to find that everything had changed. Like, we got a Target now? When did that happen? And we definitely don’t remember the mall being this small. And why do we have five independent coffee shops, all with their own weekly Open Mic Night? It’s a town of 50,000 people – even weekly Open Mic seems like a little much. And yeah, so maybe we weren’t expecting a parade or anything to celebrate our coming back to the old digs (though, you know, it would’ve been nice, considering we basically won the Homecoming football game back in ’97 when we were down 10 points against our biggest rivals, the Pontiff Penquins), but is it too much to ask for the local townspeople to fight a little harder to make sure the first two rows of the home bleachers at the football field keeping being for varsity football alumni only and not for some jerk high school kids who think they’re entitled to everything? Is nothing sacred? Does winning one Homecoming game more than 15 years ago now meaning nothing to you people?Anyway, if you wanna let your kid savor the passage of time – you know, before they grow up and start to be unappreciated and basically forgotten by everyone they’ve ever grown up with – then we suggest you get them this Child Turtle Costume. Give them the gift of slowing everything down before life starts moving too fast and everyone stops remembering that they were the one who came up with the idea to paint and erect a giant cardboard football helmet on the town bluff whenever we won a football game, not those ’96 jerks! MAN, can’t anyone remember what happened in ’97, or did everyone just go on with their lives and start caring about new experiences and accomplishments? Unbelievable…

Hop on the Australian current and have a gnarly time while wearing this Turtle Hat! 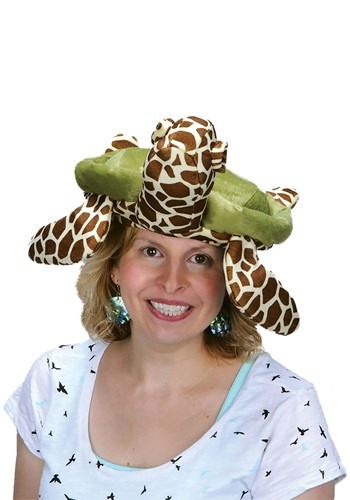 Turtles Can Be HatsIt sounds crazy. We once tried wearing a turtle as a hat. It seemed like a good idea. What could go wrong?We spent hours at the pond trying to catch one. Once we finally got our hands on the reptilian critter, we triumphantly placed him on our head! To make a long story short, we found out that wearing a REAL turtle like a hat isn’t exactly a great idea and it’s best to just leave wild turtles to go about their business undisturbed. This Plush Turtle Hat on the other hand? Well, it’s designed to be worn as a hat, so it feels like a dream on your head!Product DetailsIf you’ve always wanted to have a turtle on your head, but without the hassle of trying to wear a real turtle on your head, then you need this Plush Turtle Hat. It’s made out of extra-soft materials, so it feels quite comfy on your head. It’s soft sculpted features make it look like a cartoonish sea turtle. It even has a pair of bulbous eyes on top!Skip the Trip to the PondLeave those turtles in the wild alone. If you want a turtle on your head, then get this soft turtle hat to wear! You, and the turtles in your local pond, will both appreciate it!

Head for the sea in this Children’s Sea Turtle Costume! Okay, maybe don’t actually let them attempt to swim in this costume because that is a bad idea. This costume features a 3D shell on the back! 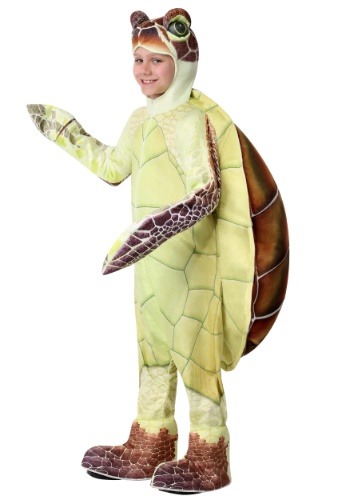 Ridin’ the TideLast time we went to the beach we took a poll. Which animal of the high seas was the most chill? It probably won’t surprise you but people hands down voted for the sea turtle. Okay, okay. Our company has never actually traveled to the beach just to harass people into taking an animal personality poll. That would be an irresponsible use of an opportunity to have fun. But still, we challenge you to find a creature that moves through our oceans as serenely as the sea turtle. Just imagine, they travel over ten-thousand miles with their family every year and they never even threaten to turn the car around! So if you can see your child getting in touch with their chill yet adventurous side, this sea turtle is the way to go!Product Details & DesignIt’s easy for your child to step into a chill state of mind with this Made-By-Us sea turtle costume. Our designers and graphic artist put together this unique bodysuit with an intricate scale and shell pattern. The light green patterned belly is topped with a deeply colored shell with natural tones that you’d find while scuba diving with these nautical reptiles. It’s easy to transform into this chill oceanic creature. The jumpsuit zips up the front. The suit also has an attached turtle head hood, flippers that can fold over your child’s hands, and boot covers that hide any shoes your kiddo might be wearing. On Island TimeWhen autumn is around the corner and Halloween is on your mind, it’s hard to keep a tropical island vibe going on in your head. When your child is dressing as this turtle, you’ll have vacation brain even if the wind is howling outside. So put on some ukelele music and relax with your child this holiday season. Halloween has never been so laid back!

Cowabunga, dude! This Tiny Turtle Infant Costume will turn your baby into the cutest little thing with a shell! 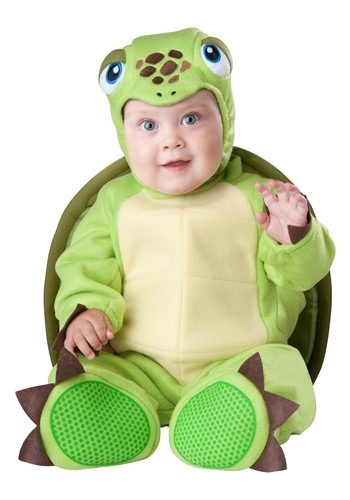 What’s small, adorable, loves baths, crawls to get where they’re going (usually pretty slowly), and doesn’t like to be left on their back for too long? Are we talking about turtles, or your kid? Can’t tell the difference? Then this might be a pretty good sign that your little one’s spirit animal is none other than everyone’s favorite amphibious shell-dweller! And there’s absolutely nothing wrong with that at all, because we’re pretty dang sure it’s been scientifically proven that turtles are the cutest creatures in the pond. That’s why there’s no better way to bring your baby out of their shell this Halloween than dressing them up in this super-adorable Tiny Turtle Infant Costume!It’ll let your kid truly bring out their inner turtle, literally from head to toe. The headpiece pulls double-duty as a warm hood with a friendly turtle character’s face, complete with eyes, a nose, and a “mouth” where all will be able to see your baby’s cute smile and bright eyes. The jumpsuit, meanwhile, makes life easy not only for the little turtle wearing it, but also for mom and dad. It easily snaps open along the crotch and inseams, because sometimes said little turtles can have… well… little “accidents” and need new diapers. Also included are booties with (non sharp) turtle claws, and, of course, the shell. Because a turtle isn’t a turtle without one!So make baby’s first Halloween a truly cute, Instagram-ready occasion for family and friends alike with this Tiny Turtle Infant Costume!

Slow down this Halloween with this Adult Turtle Costume! Use this costume for kids birthday parties, theme parties, or dress up like Turtle from entourage for a ”punny” costume! 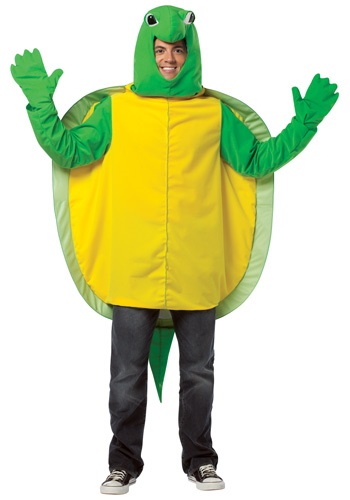 These reptiles are fun creatures who carry their home and protection with them at all times. These shelled critters have the ability to hide their heads when attacked by any mean predator that comes along. But this special feature doesn’t come without its drawbacks, because to carry around this defense system can make them slow. So slow, in fact, that rabbits think they can always outrun these guys. But one thing turtles can say that rabbits can’t is that they’ve been in space. Which happened back in 1968 when two turtles were launched into orbit and came back after a week just fine.