Winter is coming… so you better gather up those nuts and be ready! Best way to get ready is with our Plus Size Squirrel Costume! Available 2X/3X. 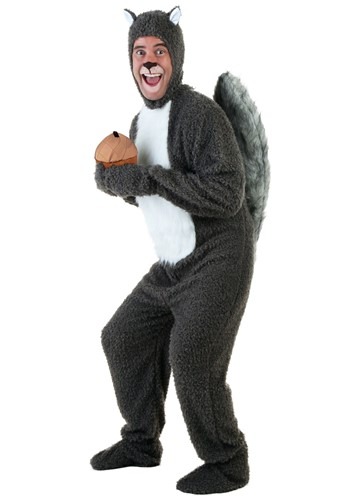 Everyone knows that squirrels eat nuts, but they eat lots of other stuff too! Squirrels eat fruit, birdseed out of bird feeders (ask anyone with a bird feeder and you’ll hear some stories), and they probably eat a lot of food we humans throw away. Maybe you did know that stuff about squirrels. Want to hear something you didn’t know? Squirrels are conspiring to overthrow the human race and take control of the earth. Fact. Sounds like a conspiracy theory, right? Wrong. Think about it. Every time a squirrel spots you, what does it to? It freezes in its tracks with the guiltiest look on its face, doesn’t it? And then it runs up a tree. Why would the squirrel run if it wasn’t guilty, right? Doesn’t seem like much evidence until you realize that squirrels are everywhere. They uses the trees and the yards of our world freely, and they all pass that information back and forth across the globe, tracking our movements, noting our weaknesses, ready to strike whenever the signal is given.Look, the squirrel empire isn’t going to be very friendly to humans. You’re probably looking for a way to escape the purges, right? Well, what if you weren’t a human after all. You show up wearing this suit, no squirrel is going to look twice! It’s clear you’re a squirrel, not one of those evil humans. Sure, you’re abnormally large, but a squirrel would never question his brother. That’s why you need this costume. Not for tomorrow, or the next day, or maybe even the day after that. But someday, when the squirrels come, you’ll be ready for them. You’ll be one of them. Better act now, friend.

Climbing trees and scurrying across the yard doesn’t look as weird when you do it wearing a Squirrel Mask. It still looks pretty weird though. 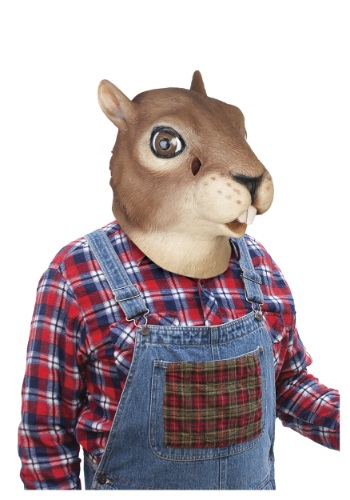 Don’t let preparing for winter get you down! There are still plenty of nuts and berries out there to gather and stash around your home so you won’t starve in the cold. And whenever you get bored, you can just scamper up your favorite tree and jump from limb to limb, chattering at the neighborhood cats the whole time. While you’re out, you may even find a new friend to frantically chase around!If that sounded surprisingly relatable to you, you may be a squirrel. Since we’re not trained or licensed squirrelologists, we’re not legally able to make an official diagnosis; however we can suggest wearing this Squirrel Mask to help let your inner-critter out to play. This molded latex mask makes you look like an adorable forest scavenger, and features eye holes and slits to breath through while you scour a party for snacks to horde for the upcoming winter. Again, we’re no squirrelologists, but we happen to know from experience that this cheeky mask is perfect for fighting off the winter blues!

Complete your squirrel costume with this Deluxe Squirrel Ears Headband! These realistic furry ears will have you searching for acorns in no time! 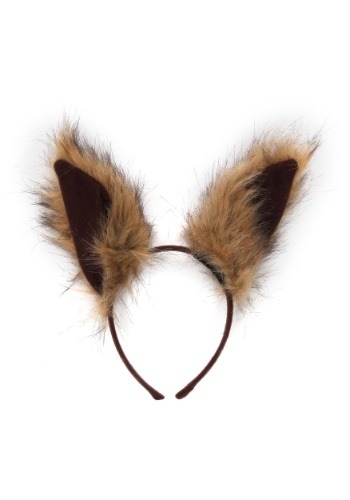 Squirrel About TownIf you plan to spend this Halloween flitting about from one fabulous party to the next, stocking up on snacks and chitter chattering with all of your pals, then you may as come as you are…a cute little squirrel!This Deluxe Squirrel Ears Headband is a simple solution to your costume needs—one so cute, you’ll go nuts for it (sorry, we couldn’t help ourselves). It will easily help with your transformation without a lot of messy glue, face paint, or the rare dark magic really required to turn you into your favorite forest critter!Product DetailsThis is a basic plastic headband, turned adorable by the addition of sewn-on, realistic-looking faux fur squirrel ears on top! Being a squirrel and all, you may want to stock up on two or even three of these accessories, just to have an extra stowed away for times of costume scarcity. It can’t hurt!Bright-Eyed and Bushy-TailedWe won’t be surprised if, even after Halloween has passed, you wake up in the mornings to slide this headband over your locks. Living the squirrel life can pep up even your morning coffee routine and get your day off on the right paw! 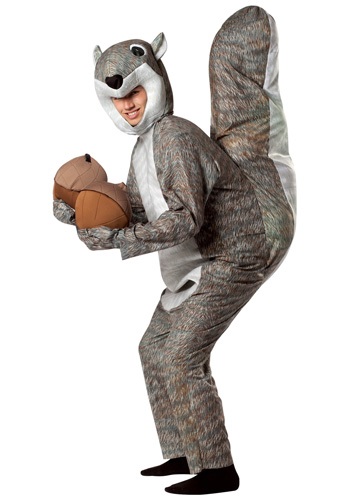 So, after a long and difficult day at work, it is hard to keep that energy up to go out and enjoy yourself. Often, you just want to crash, throw those feet up, and take a nice long nap until the morning comes… Of course, the problem with that is that once that morning sneaks up on you, it’s just time to repeat the whole process. That’s nuts!But, fortunately, you are not at a total loss. There is a way to fix this problem. You just have to channel energy from some of the endless supply held by some of the world’s critters. You’ve heard of the idea of squirreling away energy for the coming days, right!? Well, where do you think that came from!? With their darting tails and faster feet, most of us are still trying to put together what’s going on by the time that the little suckers are off to their next mission.It is time to join the nut brigade and hop into this amazing Squirrel costume! This polyester jumpsuit has off-center hooks for easy fitting and a vinyl tale that inflates to stand up on its own—no personal energy expenditure required! The foam hood has an inner fabric for comfort and has the adorable squirrel face printed on it so you’re sure to get all the grins all night long. You can even stuff the hood to give you a chubbier and squishier face! Mitts connect with the jumpsuit by the same hook and loop fasteners. Now, just grab your nuts—stuffed accessories, of course—and prepare to win all the gloried attention from your friends.

This squirrel mascot costume is ready to scamper into your next event and entertain the crowd! Perfect for sporting events and other special occasions. 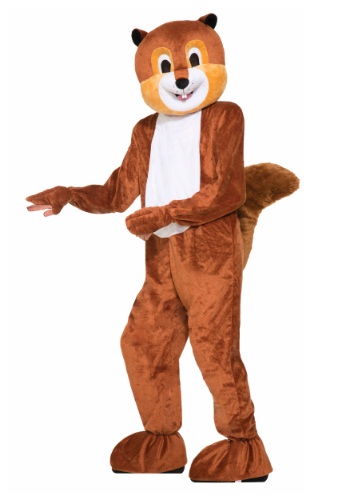 What kind of team has a squirrel for a mascot? A pretty darn cute one, we say!But you know, being a giant squirrel isn’t all it’s cracked up to be. Have you ever seen a basketball sized nut? They are really hard to come by these days! And you should see how viciously a human-sized squirrel will fight for one; that’s probably how they became a team mascot, anyhow. Someone watched that process and thought “whoa, we should name a team after those terrifying little critters!” Fortunately with this Scamper the Squirrel Mascot Costume, you can cheer on your team without having to fight for survival. You can even get out of the woods entirely and go do human things–like grocery shop–so you have more reliable food sources! Plus, you’ll be a big hit at the campus Halloween party. Who wouldn’t want to dance with a furry, plush squirrel? Especially one named Scamper!The one piece jumpsuit is super soft and zips in back to enclose you in a cuddly cocoon of squirrely goodness. There is a large stuffed tail and a stuffed mask that encloses your entire head, ensuring that you look 100% squirrel-like. We would maybe recommend staying out of the forest when wearing this costume…you don’t want to accidentally tread on some other giant squirrel’s territory and find out precisely how not cute a squirrel can be!

If you’ve got a nutty child then you’ve just got to get them in this Child Squirrel Costume! It brings the adorable backyard critter to life in a whole new way. 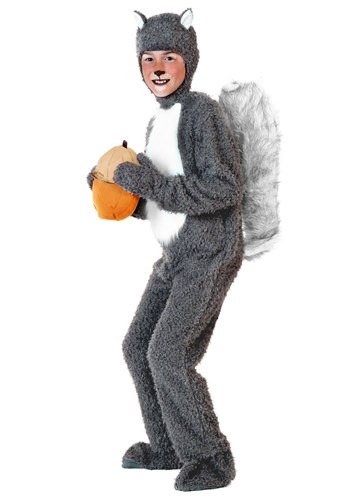 Kids have always had more than their fair share of energy, curiosity, and ambition for mischief. Bundle all those traits up into a small frame and there is no limit to the potential places that your tyke might find their hands. The animal kingdom certainly did its work in offering humanity the near pinnacle of the proverbial food chain of disaster-makers! But, only near pinnacle. There are yet a few frenzied furballs that manage to compete and take the gold at each annual Marauders of Mischief Moots.No matter which species show up for the varied contests, nothing is able to offer a real challenge to the master of squirreling away treasures and looking adorably innocent whilst doing so. Of course, the fact that the term ‘squirreling’ even exists is proof enough that few can ever rise to their occasion. With their darting tails and faster feet, most of us are still trying to put together what’s going on by the time that the little suckers are off to their next mission.So, perhaps it wasn’t the best idea to mix energetic kiddo and psycho squirrel together, but we figured it was the only way to land a medal for ourselves at next year’s competition! And now you can experience the joy of the outcome with this Child Squirrel costume. This polyester faux fur jumpsuit fastens with a rear zipper and has two-tone color and squirrely mittens that can fold back when human hands are more useful. The hood has white tufted squirrel ears and the matching white, stuffed tail is held by a cord connection to the back zipper. Just to ensure hat your kiddo doesn’t get into too much, we’ve also include a poly-foam acorn nut for an entertaining distraction. No promises on how long that’ll function, but you’ll delight in watching the display of energy either way!

Your little one is going to go nuts for our exclusive Toddler Squirrel Costume! 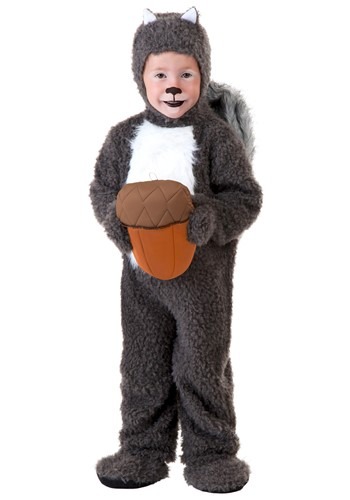 There’s really only one costume for the toddler who’s nuts about nuts: this ridiculously cute Toddler Squirrel Costume, which combines a soft gray faux-fur jumpsuit with retractable mittens, a hood topped with perky squirrel ears, and a fluffy white squirrel tail. And because these furry woodland creatures are almost as well-known for their foraging habits as their appearance, we’ve included a stuffable polyfoam acorn to hang on to!Your child will love scampering across the lawn in search of the perfect place to stash their newfound treasure, and their antics are sure to entertain the neighbors and confuse the family dog. And if you’re looking for a memorable Halloween costume, look no further—because there are plenty of great costumes out there, but it’s going to be extra hard to forget the time they dressed up like an adorable squirrel!Act now, because this is the kind of behavior that won’t seem quite as funny and innocent when they get to be taller than you are! Plus, a few photos in this outfit will provide you with a fool-proof way to make them blush at every milestone event for the rest of their life. Senior yearbook? Wedding reception? Early-retirement party? You will always be able to remind them of a time when they thought that happiness and success was as simple as frolicking through fallen leaves and putting away a crunchy little snack for a rainy day!