Get the room’s attention in this Men’s Sailor Moon Tuxedo Mask Costume. 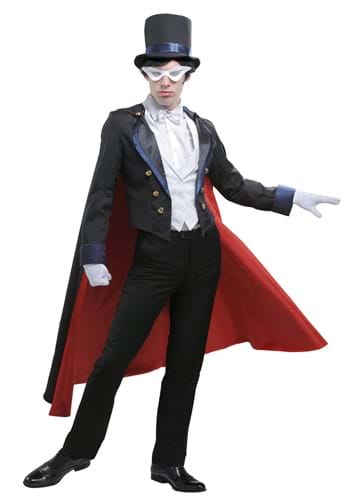 THE LOOK OF A PRINCEUsually, if you’ve got a story about heroes that transform into a group of magical girls who defend the galaxy from forces of evil, you get used to the idea that there are going to be two different looks… two identities!  We might also expect that there might be someone else with a secret identity, perhaps a friend who is actually a villain or a long-lost ally in the war against the darkness.  Well, in Sailor Moon, you’re going to get a whole bunch of all of that! But, then you have the quizzical existence of Tuxedo Mask.  Who is he!?  Is he an ally to the Scouts or an opponent?  How about that college guy who is always picking on our civilian Sailor Moon?  Well, truth be told, he has three identities!  Tuxedo Mask is not only the secret (usually) hero aiding the Scouts, but also that trash-talking college kid… and the Prince of Earth!?  Well, with that much going on in a guy’s life, he might need some help! DESIGN & DETAILSEven though it’s been a while since Prince Endymion has walked the Earth, our in-house designers are still happy to serve our protector and future hubby to Princess Serenity! What better way than with this officially licensed Tuxedo Mask Costume from Sailor Moon?  This exclusive look includes slim-fit tux pants and a shirt front with a white bow tie attached to the collar.  The elegant tuxedo jacket features shining golden buttons and a long black cape with Tuxedo Mask’s iconic red lining.  The tall top hat has a blue band that matches the jacket’s lapels and you need not fear for your identity thanks to the white mesh eye mask.  PRACTICE YOUR ROSE TOSSINGWe don’t know a ton about being Terran princes, but we do know that Tuxedo Masks have a pretty dangerous aim with flung flora.  So, we will take care of making you look the part and you just worry about your underhanded rose throw!

Harness the power of the universe and fight to save Earth in this exclusive Sailor Moon Costume for women. It features an officially licensed Sailor Moon look straight out of the series. 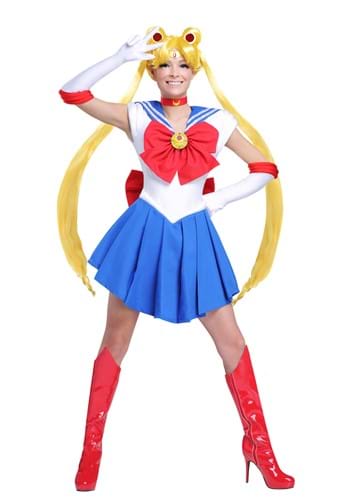 MOON PRISM POWER!Sailor Moon is the defender of our galaxy against the evil powers of the Negaverse, the Dark Kingdom, and anyone who would dare be mean to kitties or suggest that growing girls shouldn’t have that extra portion of cake.  She’s also just a little bit awkward, occasionally jealous, a periodic crybaby, and, otherwise, the noblest soul that we could ever hope to find!  Now, if only we could all agree on what she says when she transforms into Sailor Moon! Between her various transformation devices, whether she has the Silver Crystal or not, and which language we’re translating her adventures into, she says a number of different things.  The biggest argument is if she should say “Make-Up!” after her “Moon Power” phrase.  If you tend to call her civilian form Usagi, you probably think it is a critical component.  If you call her Serena, you might not even know of the full phrase!  DESIGN & DETAILSWhether you prefer the English dub, original Japanese, or the manga version of Sailor Moon, you’ll no doubt have your moves and phrases perfected.  But, until you can truly activate the magical transformation, our own Earth-based team of Sailor Designers have this officially licensed Sailor Moon Costume ready for you!  This look is fully decked out with high-quality materials to help you outlast the forces of darkness.  From the white leotard, blue pleated skirt and sailor flap, and large front and back bows, you’ve got the Sailor look down pat!  The Moon Prism and Tiara complete the look and have you ready for all your adventures.IN THE NAME OF THE MOON…You might not even need to warn the forces of evil that you’re around to punish them when you show up in this exclusive Sailor Moon costume.  With the authentic look straight out of the manga and anime, your transformation is complete and our world is saved! 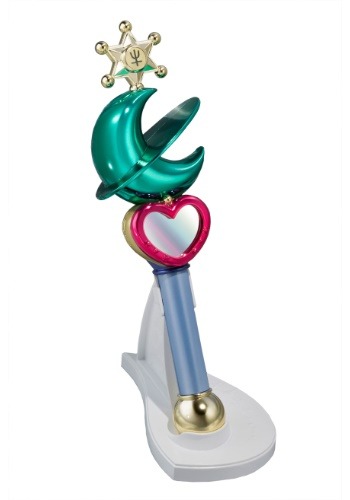 GUARDIAN OF NEPTUNEIt used to be that, when we heard about Neptune, we tended to think about our own ocean, the Greek god, and all those mighty legends.  But, could they have come from even greater stories about the magical guardian of the watery planet?Part of the team of four Outer Sailors, Neptune is the bearer of the magical mirror that threatens to awaken a force of death and destruction… or revival and restoration.  Such a tough job!  Fortunately, she’s got a few other tricks in hand.PRODUCT DETAILSKeep the power of Neptune close with you, too, when you have Sailor Neptune’s Transformation Rod from Sailor Moon.  This flashy replica looks just like the magical rod Neptune uses to transform and even features a similar light show and the sounds of her attack and transformation phrases!  Not only that, but you can keep it safely on a stand when you’re not on your own adventures.RELICS OF A GUARDIANThanks to the innate psychic abilities and mighty powers of the Senshi of Neptune, we can all breathe a little safer.  But, being the guardian is even better.  With this Transformation Rod, you can take a look at yourself and get ready to shout out your transformation phrase all with the press of a button.

This Sailor Moon Artemis Plush Bag makes the perfect addition to your Sailor Moon costume for Halloween or for your new favorite everyday accessory! 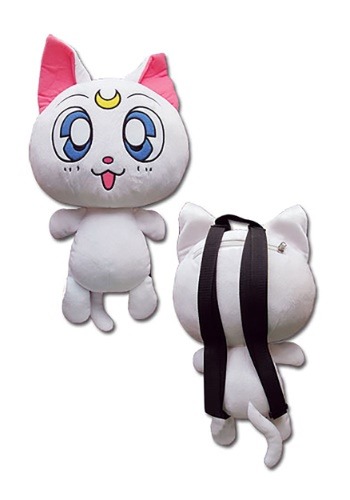 This is a Sailor Moon Artemis Plush Bag.

Get this officially licensed Sailor Moon Luna Wallet and add some Sailor Moon fun to your every day! 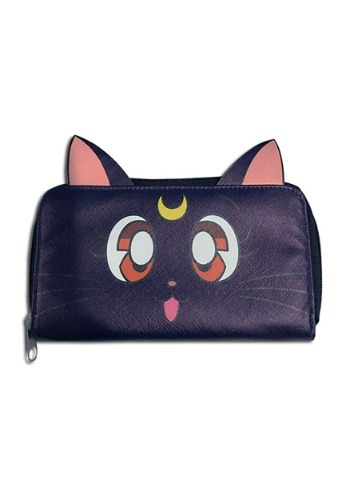 This is a Sailor Moon Luna Wallet.

Get this Sailor Moon Luna Plush Bag now and you can bring Luna around with you wherever you go! 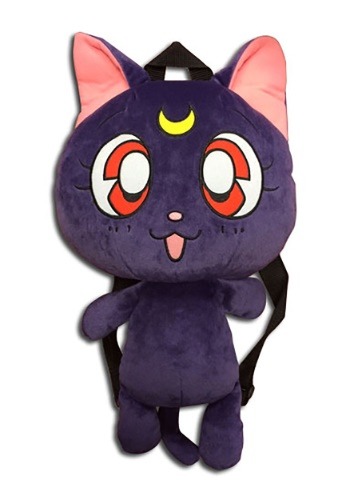 Sailor Powers AwaitUsagi Tsukino (or Serena depending on the dub you like to watch) owes a whole lot to this little kitty! Luna helps her awaken to her inherent Sailor Moon powers. Without Luna, Usagi may have just stayed a normal teenager who flunks her math tests on the regular!Well, if Luna can do that for Usagi, perhaps this little Luna Plush Bag can help you awaken your inner Sailor Senshi powers… or at the very least it can carry a few of your necessities with you on your next trip to the mall!Product DetailsBased on the helpful, and adorable, kitty from the Sailor Moon anime series, this Luna Plush Bag recreates the character in a soft, squeezable form! It features 3-D ears, appliqued details in the face and a pair of adjustable shoulder straps, so you can take her with you anywhere. Of course, it has a secret pouch in the back of the head, so she can even carry a few of your necessities with you on your next journey.Sailor Moon Cosplay BagIf you’re planning on cosplaying as Sailor Moon, then who better to bring with you than Luna? This bag helps you put that finishing touch on your Sailor Moon look!

Add a pair of Long White Gloves to your next Marylin Monroe costume for a look that’s straight out of Hollywood. And who knows, you maybe America’s next it girl! 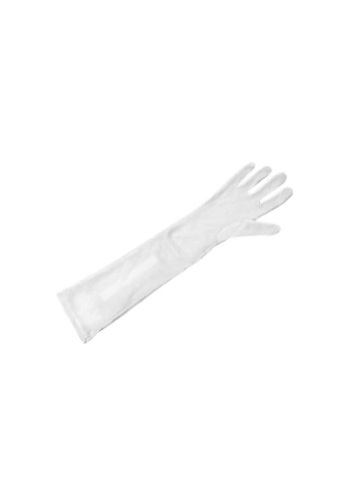 Ask not what you can do with these Long White Gloves, but what these Long White Gloves can do with you…That’s the saying, right? Oh well. The point we’re trying to make is that a great pair of costume gloves can both satisfy your dress-up needs and inspire new looks for years to come. We have hundreds of costumes here that are made more authentic, more complete, more fulfilled by a pair such as these. From princesses, to storybook heroines, to flappers, to Hollywood icons, the list of looks that lust after a pair of elbow length, winsome white gloves seems endless. So pick up a pair to feel like a Beauty this year, then find a way to wear them over and over again. You’ll thank us for this pro tip!

Complete your Sailor Moon costume with this officially licensed Sailor Moon cap that is blue and white with a red bow. Or get this fantastic cap for your new favorite accessory! 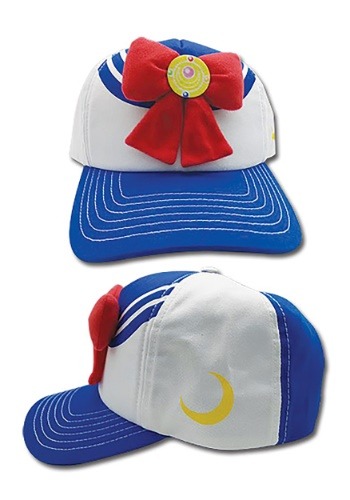 DISGUISE POWER!Grab that mysterious Luna Pen and shout out the magical phrases because it is time to transform yourself into another person with the glorious powers of moon magic. We’ve watched our favorite Pretty Guardian, Sailor Moon take on all sorts of different disguises to success in her mission—everything from doctors to fortune tellers—but that doesn’t mean that she’s the only one who can. It’s time to transform into a Sailor Moon Fan! … Wait. You already are one!? PRODUCT DETAILSIf you already love Sailor Moon, you won’t need a disguise to pretend to be one. But, you can still make it a bit more obvious that you have some serious love for the Sailor Scouts and their noble (if awkward) leader. This Anime Cap is designed to look just like Sailor Moon’s transformed costume from the blue and white to the bright red bow—even the crescent moon on the side! CASUAL MOON MAGICWhen you want to channel the power of your favorite Sailor Scout and Moon Princess but want to keep it casual, you can’t go wrong with the Sailor Moon Anime Cap! Just remember that you are representing both Earth and the Moon while wearing it. 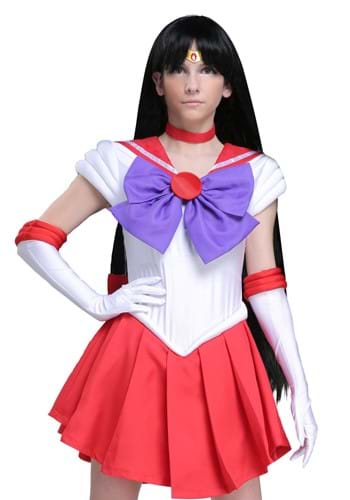 When you’re one of the protectors of the Solar System, it’s hard finding time to beautify yourself. Plus, you’re always in competition with Sailor Moon. She may think that she’s the prettiest of the Scouts, but we all know she’s comparable to a gorilla (Sorry, Sailor Moon). You’re the fiercest member of the group predominantly because of your strikingly beautiful brunette locks. You make all the other Scouts look like well, meatballs. If you’re planning on impersonating the beautiful Sailor Mars then rocking waist-length, super-straight, sleek brunette locks is a must. It’s a simple and convenient accessory that completes your transformation into the most captivating of Scouts, Sailor Mars. Whether you have to exorcise demons, defend Tokyo against the Negaverse, or use your index finger to shoot fire, this officially licensed accessory will keep you looking your best.

Add this Sailor Moon Brooch Bag to complete your Sailor Moon costume! This bag is officially licensed and features a crescent moon. 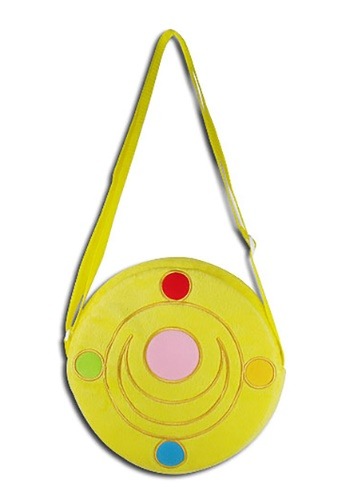 Anime AdmissionsWe can admit it. Watching Sailor Moon was a huge part of our middle school years. We often wished that we could’ve joined Usagi (or Serena depending on which adaptation you watched) on her quest to rid the world of villains and monsters. Of course, we never bumped into Luna during our teenage years and we never got one of those handy Transformation Brooches to help us out with that. The good news is that now, we have this Sailor Moon Brooch Bag to help us feel more like one of the Sailor Senshi!Product DetailsThis Sailor Moon Brooch Costume Bag is officially licensed and recreates the look of Usagi’s brooch from the anime series. The bag is made out of yellow, velour fabric and features the crescent moon design in the center. The outer edge of the bag has the red, yellow, green, and blue symbols on it and the adjustable strap lets you carry it around your shoulder when you’re not battling against Queen Beryl. The top zipper reveals an inner pocket that’s big enough to carry your essentials!Sailor Senshi BagIf you plan on cosplaying as one of the characters from Sailor Moon, then there’s no better bag than this one based on her signature Transformation Brooch!