Wear this Deluxe Kermit the Frog Adult Costume and become the famous green host of the Muppet Show! 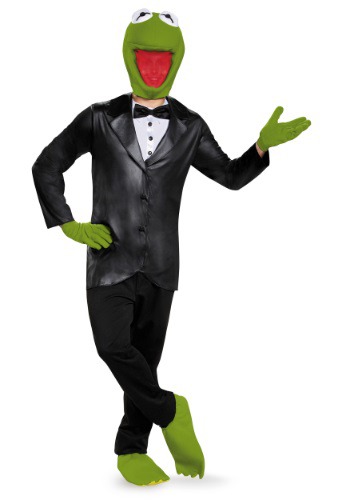 They always say that it isn’t easy being green. Rather, a specific someone says that. And, boy is that true! The king of the green has been all over the place, working fervently to bring about some solid success for him and his buddies. And, he’s been doing it for a really freaking long time! Why, Kermit was practically a tadpole when he and his other kiddos were singing in the nursery and making big time plans. Even then, the leader of the gang of muppets was taken for granted, but the noble frog never let it go to his head and continued to push forward.We’re all pretty familiar with his latter life activities given the success and even rebirth of the Muppet Show. Even in this economy, Kermit manages to bring in the nostalgic feels to get the whole community remembering what it was like to sing some of those fantastic songs and watch some truly abnormal sketch comedies. And, all the while, he tried to show the new generation just what they needed. A few Rainbow Connections and even still letting the goofball Gonzo enjoy his limelight on stage… but then Kermit even had a ton of other adventures. He aided a cursed princess and a frog prince reunite together, went on a major pirate cruise in the Caribbean, and even landed some important moments on a particularly famous Street!Where does a frog find all the time! Speaking of time, we think it is yours… to become the epic green storyteller and producer. You can do so with this officially licensed Deluxe Adult Kermit the Frog costume. Hang out at the theatre in this faux leather shirt and bow-tie combo that gives your green polyurethane foam headpiece, gloves, and shoe covers the perfect blend of professional theater and lake-dwelling frog maestro! Join up with several of the other Muppet characters and you’ll be ready to put on an epic show of your own and prove that, while it might not be easy to be green, it is definitely awesome.

This Miss Piggy Adult Costume is an officially licensed costume and will let you play the role of your favorite Muppet show character. 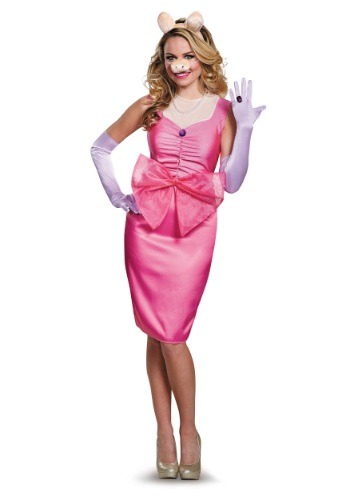 Demanding. Loud. Argumentative. Fabulous. Say what you want about Miss Piggy, but the woman, uhhh pig-woman, is captivating. She’s a rare mix of Marilyn Monroe and a farm animal. She’s both demure and aggressive. She has feminine charm, but at any moment she can fly into a fit of rage. We love a Muppet that keep us guessing. And so does Kermit apparently, which is the reason why Ms. Piggy is dressed so stylishly. She wants to impress her Kermie, of course.Miss Piggy is pulling out all the stops when it comes to thrilling her man, that’s why she’s going to wear this costume. The satin pink dress has a sweetheart neckline that no man (or frog) can ignore. The ruching on the bodice is flattering for all figures and the large bow on front hides any imperfections you’d rather keep under wraps. Take some advice from Miss Piggy, you’ll look like a knockout in this dress (just trust her or she might try to karate chop you.) Top off the look with the pig snout, wig,a pearl necklace and some long purple gloves. You’ll have the attention of every frog in the room. Give ’em a smooch, they just may turn into a prince!