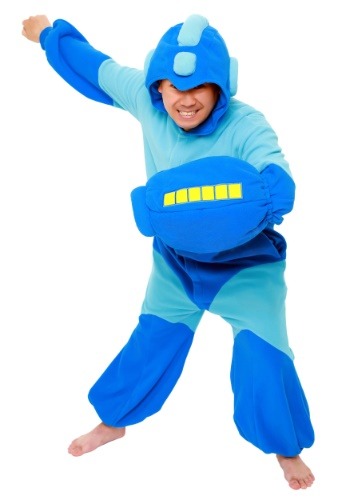 Rise of the RobotsThe age of robots is coming. It’s inevitable. We’ve seen those little ones that vacuum the floors. We want to believe that they’re nothing but good-natured, cute automatons, but we’ve played ALL of the Mega Man games. All it takes is a tiny alteration from a crazed scientist like Dr. Wily to turn them into an evil Robot Master, bent on total destruction. Also, that little bot looks suspiciously like a Gabyoall from the first game. So, yeah. We’ve got our eyes on you, little vacuum cleaner robot.What we really need is a Mega Man in real life. You know, just in case the robots ever go full-on evil mode. Whenever bots go rogue, he makes sure that they don’t cause any harm to us, squishy humans! Unfortunately, we have been unable to contact Dr. Light and we’re not really sure if robotics technology level. Maybe you could help against the inevitable rise of the robots by assuming the role of the Blue Bomber yourself!Product DetailsThis Mega Man Kigurumi makes you look just like your favorite bot! It’s an ultra-soft, pajama-style jumpsuit that’s as cozy as it is cool. That means you can use it as a robot-fighting outfit, or as a comfy outfit to take a nap in. It comes with the classic light blue and dark blue colors of the video game character. It comes with an attached hood that’s shaped like Mega Man’s helmet and the left sleeve is shaped like the Mega Buster.Couch RobotWhether you plan on taking on Guts Man in a daring battle to save the world or you end up taking a nap on the couch, this Mega Man pajama costume will make sure that you feel comfortable while doing it (nothing wrong with being a couch robot)! Just do us one favor. Keep your eyes on that robot vacuum cleaner. It’s not to be trusted!

This exclusive Adult Megaman costume is a must have if you want to be the coolest robot video game character ever. 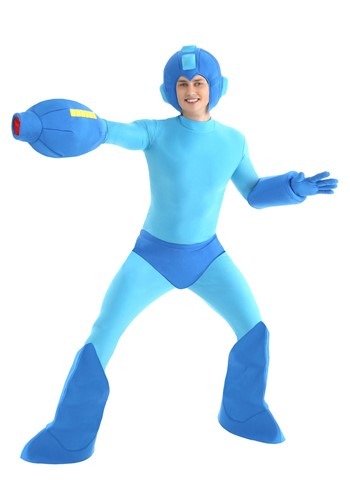 You’ve spent hours memorizing Yellow Devil’s movement patterns. You seem to be able to instinctively, almost clairvoyantly, know when you’ll find the next energy pellet so you can push your damage meter to the very edge before you have to refill. You can jump over every one of Gutsman’s attacks. You can even beat Metalman without taking a single point of damage using only the Buster Shot, because charging shots just slows you down. You know everything there is to know about the Mega Man video games, from 1 all the way to 10. Are you ready for the next challenge?It sounds like you’re definitely ready to try this Adult Mega Man Costume on for size. This officially licensed costume will put you right in the shoes of the classic 8-bit character! The pullover blue shirt and matching blue pants are separate for added comfort and ease of motion, and the darker blue features like the left glove, boot covers, and briefs are foam to add texture and detail. The included soft fleece helmet fits snugly on top of your head, and Mega Man’s iconic Megabuster arm cannon, which is stuffed to keep its shape, completes the look while making sure you’re equipped to take out the next Robot Master on the list. Or you can fight new robot bosses that you find at the next costume party instead, like Double-Dip Man. (We hear Dr. Wily created him to ruin party experiences across the world.)

This licensed Mega Man Men’s Proto Man Costume is an exclusive that Nintendo fans can only find here. 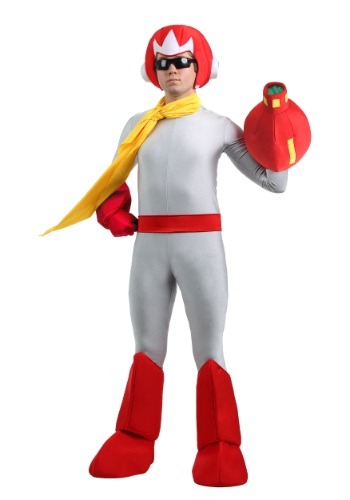 Mega Man 3 was a pivotal moment in the Mega Man franchise.We’re not talking about the introduction of Rush, the Blue Bomber’s faithful robot dog companion, or even the slide move. (Can you even imagine a Mega Man game without the slide move now?) We’re talking about the mysterious robot who challenged you in the middle of Magnet Man’s level. Who WAS that robot? And those sunglasses? Way cool! Although he seems like an enemy, there’s almost something friendly about him! Of course, later, we’d find out that it was Proto Man, the robot created before Mega Man and that he’s on a mission to help stop Dr. Wily, spoiler alert. Yes, the third installment of the game cemented his role into the Mega Man universe and we’ve even made a costume of the red-clad robot!Based on his many appearances in the Mega Man video games, this Proto Man costume will transform you into Dr. Light’s first successful robot! The silver colored jumpsuit is reminiscent of the classic colors of the character, while the glove, headpiece, belt and boot covers add that flash of red that he’s known for. Of course, the costume comes with a polyfoam proto buster that fits on your arm, so you can blast bad robots. Finally, what Proto Man costume would be complete without a dash of his cool style. This costume comes with his yellow scarf and a pair of dark sunglasses to finish the look off! Once you have it on, all you have to do is find a few robots, like Guts Man or Snake Man, so you can steal their powers and use them to blast down Wily’s UFO. You can do it!

This Mega Man Costume for Toddlers and Infants is an exclusive, licensed video game costume for your kid! 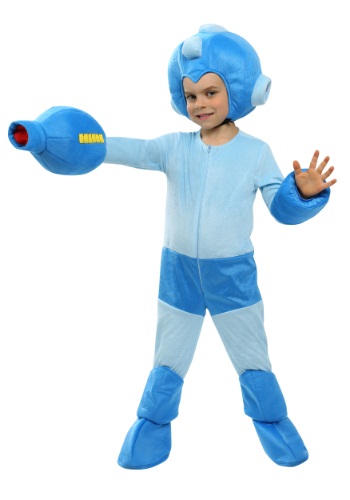 What’s your plan for a robot attack? You know Dr. Wily has been toiling away in his workshop, creating the next batch of robot masters, right? He’s just waiting to unleash them upon your neighborhood and we think you’d better have a plan to deal with them!Help against the next crisis may just be a bit closer than you think. We have a hunch that your toddler has a enough energy to power up one of Dr. Light’s Mega Busters, so all he really needs to battle against all of the evil robots of the world, is a cool outfit to wear. It just so happens that we’re pretty good friends with Doctor Light and he helped us create this Mega Man costume for toddlers. It’s based on his greatest creation, Mega Man, and once your child has it on, even Guts Man won’t be a problem for him.The costume comes with everything a kid could need to transform into the signature video game character. The light blue jumpsuit has dark blue accents to recreate Mega Man’s outfit, and a front zipper. The Mega Buster arm cannon piece fits over your child’s hand like a glove and is made out of soft fabric. The blue helmet fits with a strap under the chin and finishes the look.Once your child has it on, you’ll instantly feel safe, even if Dr. Wily shows up outside your house, hovering around in his UFO.

After Dr. Wily unleashes his evil robots upon the world, it’s up to you to stop them with Mega Man’s Megabuster! And don’t forget your buddy Rush, you’ll need him to help you blast those evil bots! 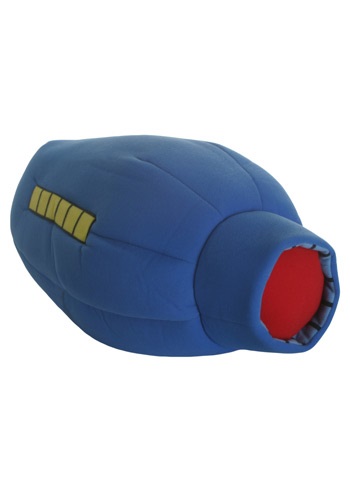 Without this Mega Man Megabuster you’re just a silly android. Cheer up Rock, Dr. Light has given you everything you need to defend the world from Wily’s evil robots!