Be the secretive star of the masquerade ball when you wear this Black Baroque Mask! 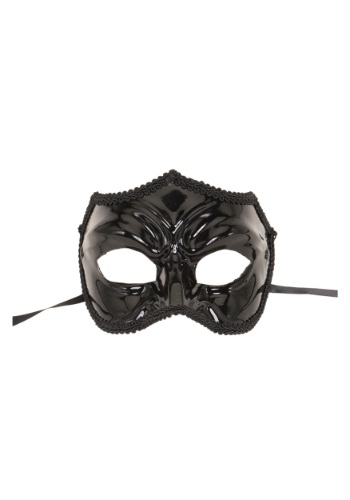 When you are getting ready for a fancy masquerade, picking out an outfit is the easy part! It’s usually choosing what kind of mask to wear that is the real challenge, since you probably want one that reflects who you are, but not one that will instantly give away your identity. You may want a mask that is elegantly designed, but not so fancy that it distracts from the rest of your ensemble that you’re spending so much time putting together. It’s harder than it sounds! If you’re wanting a mask that compliments your party-wear, look no further than this Black Baroque Mask to complete your look! This molded plastic mask is more than just a simple eye cover, and it features expressive ridges and decorative satin edging for a sophisticated style. Whether you show up in a strapping tuxedo or a graceful ball gown, all of the other party guests will be dying to know who is under that black mask!

Cover a scar or dress for a masquerade in this decorative Red Black Lace Half Mask. Who says you have to reveal the true you, this mask says it all. Seriously, the mask talks, if you listen closely it says I’m the best thing that’s ever rested on your fac 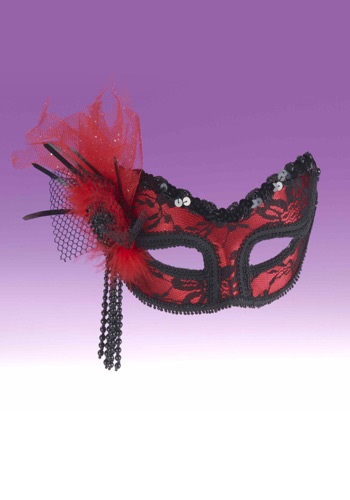 What is it about half masks that can turn a normal party into a gala?Maybe we’ve read a one too many Harlequin Romances, but think about it! The masquerade ball practically made Romeo & Juliet. Would they have fallen in love if they hadn’t been swept up in the intrigue and exciting of a bunch of half-masked people dancing around? Maybe! But we’ll never know, will we, because that play is at least 500 years old and Shakespeare is now writing sonnets in the big playhouse in the sky! And what was one of the most mesmerizing scenes in the movie Labyrinth? When they were at the masquerade ball, right? (Admittedly the whole thing was also a little creepy, but let’s not quibble facts right now…we’re on a roll!).And don’t forget how great these masks are for covering up disfiguring scars or hideous face syndrome, as proved by both The Phantom of The Opera and The Man In The Iron Mask. With these gorgeous and decorative accessories, you’ll never have to worry about hearing the terrified shrieks of men, women, or children whence they come upon the sight of you! Basically, “What a lovely mask, I hardly noticed your face!” or “I have no idea who you are or might be, let’s dance!” are the only comments you’ll hear when you’re wearing this Red Black Lace Half Mask! And frankly, with it’s decorative sequins, beads, and feathers, this mask deserves all the veiled (get it?) compliments it can get!

Reign over your castle even after death in this Corpse Countess Costume. This is a classic ghost costume with an unique twist and goes great with our men’s version. 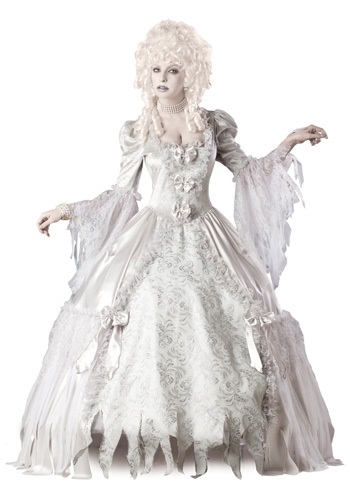 The life of the lovely Countess Elizabeth Báthory de Ecsed is known well in some circles. In others, the notorious Bloody Lady of Csejte sounds like a character from a horror novel. The Countess of the Carpathian Mountains holds the title of the most infamous female murderess, holding victims in excess of 600 people! Though, her vampiric practices of bathing in blood in order to forever preserve her beauty might not have certain truth, she is yet called the Blood Countess and managed to escape trial. Living in silent and solitary confinement until her eventual death, even her self-imposed prison became eternal when it was walled up. According to legend, anyway.But, what comes of a woman who will likely forever hold the record for such single acts!? What happens to the woman who may have ensured her eternal youth through the sacrifice of virgin blood? When the locals barked angry thoughts at the idea of the Bloody Countess being buried among those that she’d slain, she was to be sent elsewhere, buried perhaps in the family crypt. Though, none know where she is this day. Except, of course, those who know of the ghostly balls that take place in the afterlife!The gala is set to occur again and what celebration could be complete without an appearance of the illustrious and eternally beautiful Corpse Countess? You may have moved onto the afterlife, but you still hold the crown of the loveliest at the ball. Your lovely gown is accented with lace and brocade, tattered by time as it might be. Silver bows and nylon lace makes this structured petticoat and gown the eminent sight both in life and afterlife. Bolster your look with additional ghostly white makeup and a hauntingly lovely period wig and it will be as though Bathori walks once more!

Unleash your evil alter ego in a Gothic Swan Masquerade Costume. Sexy, evil and deadly, this is most fashionable way to dance “Swan Lake.” Give him a reason to love the dark side. 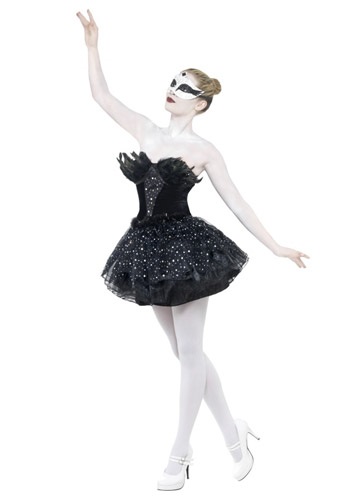 We know the pressure of the stage can be a bit…much. But we have a three-pronged approach to help you land the principal role and maintain your sanity, all while looking like a total knockout. STEP ONE: Stop living with your mother. Really, girl. You’re a grown woman and stage moms are just the worst. This step really doesn’t seem too complicated. Just do it. Go on Craigslist like the rest of the world and find yourself a roommate. To cut down on competition, maybe don’t live with another dancer. Ok? OK! STEP TWO: Get in touch with your dark side. Watch some scary flicks and read as many psychological thrillers as you can. Let your mind wander into its furthest corners. Use your journal to tap into your too-risque-for-the-matinee thoughts. The dark swan is the persona you need to work to embody, so it may also help you to start taking your coffee black, start eating a bunch of dark chocolate, and start waking in the middle of the night to become accustomed to the pitch darkness. STEP THREE: Wear this Gothic Swan Masquerade Costume at all times of the day! If you are ready to be the most intense ballerina the stage has ever seen, then you’ve got to look the part as well as feel it from within. This costume boasts a black velvet bodice with a padded satin bust, clear shoulder straps, and a tulle-covered satin inset. Of course, no ballerina is complete without her tutu, and this one has decorative feathers at the waist. You’ve got plenty of competition out there, but we aren’t worried. Just take our three-part plan and live it to its fullest, darkest potential. Pointe shoes, mask, and sanity not included.

This Adult Gold Half Mask w/Ribbon will add sparkle to any masquerade costume! 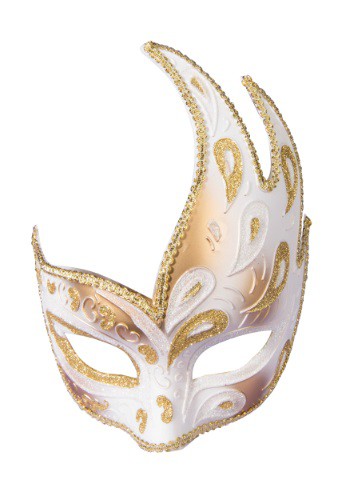 Choosing attire for a masquerade ball it one thing. Choosing the perfect mask to go with that costume is something that will take your costume to whole other level. When decided on a mask for your masquerade gown or costume, do you want something that’s perfectly symmetrical or kind of crazy and outlandish? Well, why not go for a little of both with this gold half mask with ribbon? This mask covers the top half of the face and features a unique design that has a balanced feel to it, but also includes a little extra design on one side. Gold detailing and braided design outline these white plastic masks that fasten with a ribbon. The overall design will give your costume a sophisticated, yet mysterious look. For masquerades, Mardi Gras, Halloween, or any other costumed celebration, cover your face with this gold half mask.

This Adult Karneval Beige Mask lets you masquerade in style! Perfect for Mardi Gras or any party event. 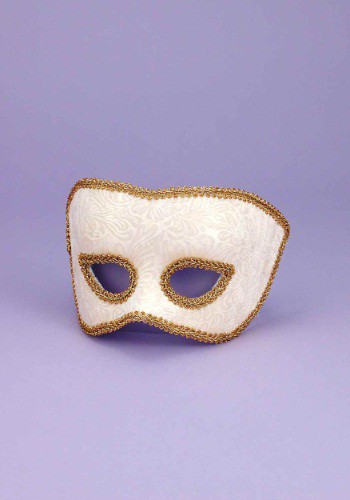 When choosing a mask for Karneval season you can’t go wrong with selecting a classic guise. Wearing a mask is a timeless tradition. Masked balls have always subsisted of a balance of freedom and elegance. Royalty used to loved a mask ball because it was the only time they had any chance of socializing with their peers with a veneer of anonymity. Your everyday citizens liked it because masks are a great short cut to a provocatively mysterious ensemble. When you don your mask you might feel strangely less inhibited. When your face is elegantly obscured you might find you can be whoever you like. This chic mask with subtle tone-on-tone texture will go with the most sophisticated evening wear. The simplicity of the masks suits both men and women, looking stunning with both tuxes and full length gowns. If you feel the need to reveal your identity the mask is attached to a head band and can swivel upward for a quick reveal. Enjoy your evening of elegance until the clock strikes 12 and the crowd shouts, “Unmask! Unmask!”

This Blue Tie-On Eye Mask is perfect to complete any blue costume! 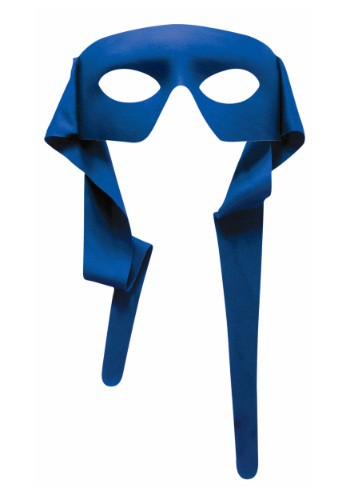 Are you looking for a new look that will really get people talking? Or, maybe you are trying out your chops as a blue-themed superhero or a swashbuckling swordsman, and need a reliable way to keep your identity safe? We suppose you could just wrap a blue bandanna around your face, or tie a cloth around your head and cut holes where your eyes go (before putting it on, hopefully!), but those don’t really scream “dashing blue superhero/musketeer/masked pirate!” What you need is this Blue Tie-On Eye Mask to achieve the kind of look that says you mean business, and that business involves wearing a blue mask! The part that covers your eyes is made of molded polyester, and the ties on the sides are cloth for flexibility. So, this mask maintains its shape while staying nice and comfortable. All you’ll need to do now is decide what to do with your new blue persona!

Add this red mask with ties to your costume or everyday look and ensure that your identity remains a mystery. 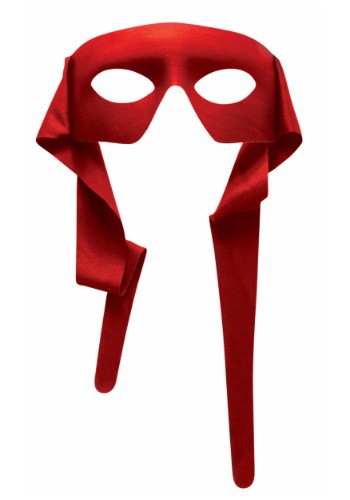 Imagine you are walking down a dark ally, and someone suddenly appears out of nowhere with a boring-colored mask over their whole face! It would be very alarming and threatening, and you’d probably book it out of there as fast as you could. Now take that same scenario, but this time, the dude that jumps out at you is wearing a bright red mask over just their eyes. If it were us, we’d still be alarmed, but also probably feel more confused than in danger. We would just be waiting for them to shout “Have no fear, good citizen!”, before sprinting off into the night. If you want to run around in a mask, while giving off more of a heroic flair rather than a nefarious vibe, try this Red Masked Man accessory on for size. The mask portion is molded polyester material to help keep its shape, and the cloth ties allow for more flexible fitting. This dashing disguise looks great with any red-themed costumes requiring secrecy, or for any other daily masked antics!