Unless it’s your birthday, let them eat cake should never pass from your lips. Especially if you’re wearing this Basic Marie Antoinette Wig. 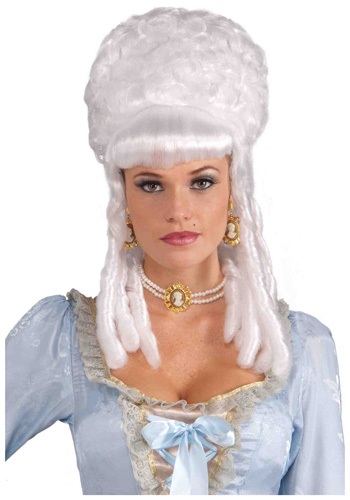 It’s good to be the Queen! Well…most of the time. Actually, there have been many examples throughout history when being a queen or king has actually gone pretty badly for them, but let’s not get ahead of ourselves. One of the best perks of being Queen is the access to extravagant hairdos. When you have someone working for you who’s only job is to make your hair look way better than anyone else’s, the sky is the limit! When you want to look like a proper queen, you need to have the proper hairdo to go with your royal attire. That’s what makes this Marie Antoinette Wig such an appealing accessory for a queen costume, since that Queen of France certainly knew how to live and look like royalty. It’s made of synthetic, white hair styled into ringlets, so you can achieve this look without any pesky dye or having a full-time hair dresser on your staff. It’s such a sophisticated hairstyle to rule in!

This King Louis XVI Costume for men will transform you into a member of the French royal family in an instant. 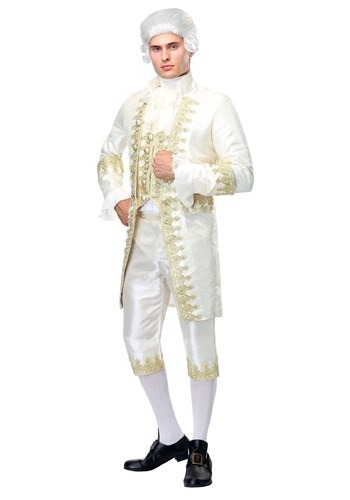 Versailles VirtuesLife as a king in the late 1700s was a social one. In fact, kings were almost never left alone. From the moment Louis XVI woke up in the morning, he was surrounded by servants, advisors, and top guys from his various councils. And yes, luxurious royal activities abounded. He had to get his wig powdered and shaped. He went hunting with the boys. He entertained dignitaries in the hall of mirrors (we’ll give you one guess what the walls of that hall are decorated with). Our point? The royal guy was super busy! With all the little details he needed to cover to keep his royal household happy, it’s no wonder he lost track of what his subjects wanted!Details & DesignThis luxurious costume is Made by Us, meaning the king’s top looks have been researched by our in-house designers. The high-waisted short pants, the long jacket, and the waistcoat all have a Rococo-inspired trim, making it look right at home in the over-the-top trappings of Versailles. You’ll love the little details from the buttons to the lightweight cravat. Just be sure you avoid any swarms of angry French peasants. Heads UpLouis’s reign might not have been a popular one, he’s the only king that literally lost his head in the end. But we like to think that his ungraceful exit from the throne room was a symptom of the times rather than a personal hit at this fashionable king. If it hadn’t been for the expensive wars, the uncomfortable wigs everyone was wearing, and the fact that the peasants wanted freedom and access to food, Louis probably would have been fine! How can you stay mad at a man wearing gold filigree trimmed short pants? Whether you’re heading out with Marie Antoinette on your arm or you’re making your royal debut solo, this costume will allow you to start Louis’s reign fresh!

Dress your child in this historical Marie Antoinette Girls Costume this Halloween. It features a pink bloomed dress with floral embroidery. 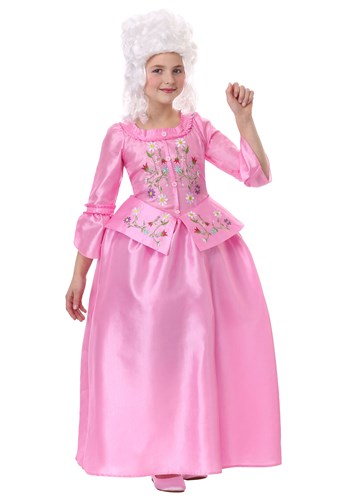 Queen of QuantityMarie Antionette is most known for her love of the extravagant. Her lush tastes applied to everything. She was so into desserts that she brought her personal chocolate maker with her when she moved to Versailles to marry Louis XVI. He created groundbreaking desserts just for the queen and her cohort. She lived in one of the most extravagant palaces in Europe but once she got sick of remodeling the grounds over and over again, she had a provincial farm town built just for her. She and her friends would dress up in maids clothes and pretend to take care of the animals. The, of course, there was her style. Her luxurious look has been gushed over for centuries. Her hair style dictated what all the ladies of Europe would wear from years to come. And yes, eventually her changing fashions caught up with her. But hey, we’re still copying her royal look today with gorgeous costumes like these ones!Product Details & DesignThis silky pink dress is sure to drop your fancy kid’s jaw. It’s Made-By-Us, lush with details lovingly researched by our in-house designers. The top has a ruched collar and three-quarter length sleeves that end with a bell. That top is embroidered with bright colored vines and flowers. The embroidered panels jut over the full-length skirt, making this ensemble perfect for your child’s Versailles debute. Curtsy to the KidYour child might change a little now that she knows what it’s like to be royal. Hopefully, your neighbors know to curtsey and bow as she trick-or-treats through the neighborhood. If not, Marie Antionette will probably forgive them due to their sweet treats. Want to make her royal look complete? Top off her ensemble with a tall wig and a dainty fan. Now you just need to learn to say Happy Halloween in French!

Like Marie Antoinette you too can create a series of fashion trends. Starts with this Deluxe Marie Antoinette Wig then let the creativity flow! Just stay away from anything that sounds like cake, you may run into trouble there. 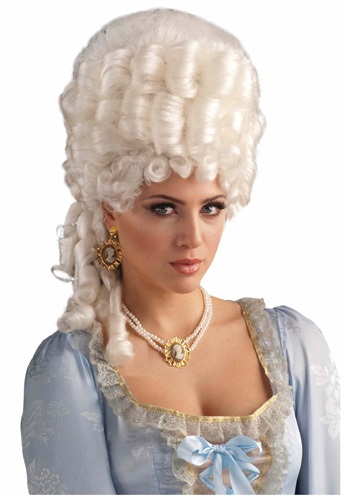 If Vogue existed in the 1770s, Marie Antoinette would probably be the editor. Sure she helped incite a rebellion that completely turned French aristocracy on its head, but you can’t deny that the woman could dress! That just goes to show you that it pays to be different from the rest. Our motto is “let ’em all eat cake!” Because you know, who doesn’t love cake? Then someone told us that Marie Antoinette said that first and it caused an uproar. If she did indeed say that then she was a pretty smart lady! Again, who doesn’t love cake? So get out there and devour as much cake as you please, but do it in our Deluxe Marie Antoinette Wig.

This Lace Choker w/ Cameo Pendant gives you the look of Gothic jewelry for your costume. 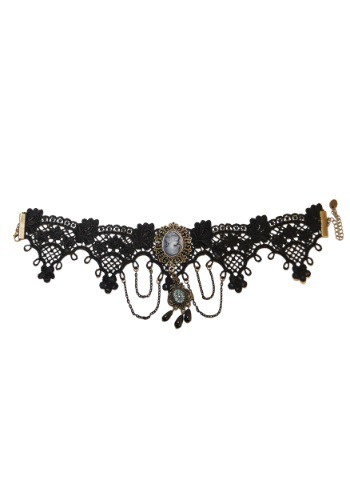 So you’ve got the outfit. A sumptuous renaissance gown? A dark gothic number? Some grubby jeans and a v-neck?Whatever your outfit, it’s not complete without the right jewelry. Of course, “right” is subjective. Right jewelry for you may mean neon beads or a candy necklace. But you can do better than that. Better than an old boring pendant. Better than a plain heart or star. You can get more elaborate. Romantic even. If you’ve put that much work into selecting an outfit, to the point where you’re now shopping for the right necklace to frame your face while highlighting your neck, well then look no further for your jewelry needs.Our Lace Choker with Cameo Pendant is perfect for any occasion. Masquerades, clandestine meets, punk parties… whatever you have planned it will be better with this little number. A black lace choker accented with a cameo and pendant will look amazing with your ensemble. Trust us. We’ve been wearing it around for weeks now.

These Adult Long Ivory Satin Gloves bring cuteness and elegance to your outfit. We like to call the combo “eleguteness.” We’re hoping that word catches on. 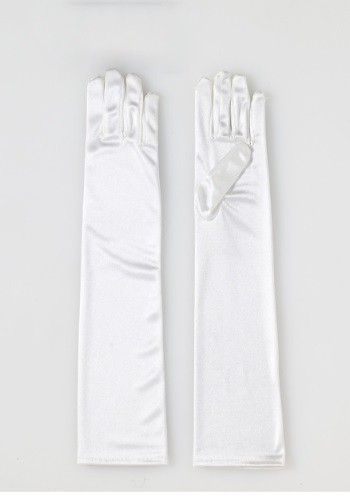 Nothing screams elegance…wait, no, elegance doesn’t scream. Nothing eloquently flourishes elegance (there we go) quite like the luxurious fabric of satin. It’s smooth to the touch, and has a sheen like the rolling shine of silky waters. While we’re helping you imagine this wondrous material, we might as well make that color white as well. The two just go hand in hand with wealth, and living on top of the world. Why? Well, because there are only so many people out there who can keep something as pure as snow that color for any longer than it is out of the box, and that’s people who are rich enough not to have to do anything. Want to take it even one step farther? What about putting a pair of satin gloves on your hands and all the way up to your elbows? The sheer, smooth elegance emanating from every inch of you when they’re paired with a lovely ball gown or flapper dress will be irresistible.

She’ll be the youngest fashionista in the world with this Child Marie Antoinette Wig. Just be certain she doesn’t incite a rebellion that leads to her beheading. That would be tragic. 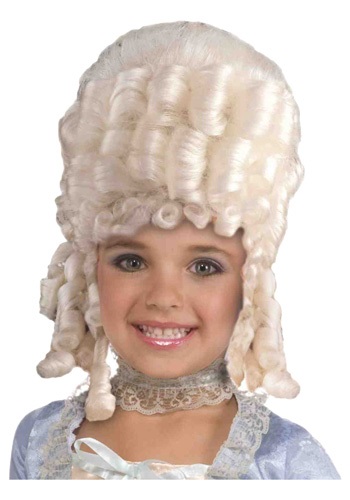 If your little princess has her eyes on growing up to be the queen, there might be something she should know about before taking the throne. It may not seem like a big deal at first, but once she’s wearing the crown, she’ll become the most influential fashionista in the country. So whatever outfits and hairdos she chooses to show off will suddenly become really trendy!That’s why it’s so important to for her to be wearing this fancy Marie Antoinette Wig at her royal debut, and make sure she starts out in style! This beehive shaped wig is made up of synthetic white ringlets, and looks as adorable as it does regal. We think it will make the perfect addition to a vintage looking 18th century style gown, with elegant makeup and jewelry; but of course, that is up to Her Highness to decide!

Add a pop of color under your outfit with this Mint Tulle Petticoat. 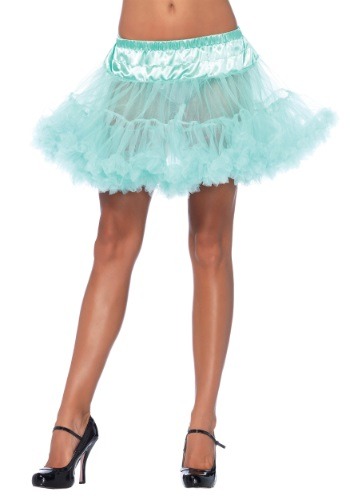 Flounce is fun! It’s fun to feel like you’re bouncing while you’re taking a stroll. And that’s exactly the purpose of a petticoat; it’s intended for extra fun while you’re wearing your costume and of course, flounce. In fact, instead of strolling, you’ll feel like you’re prancing or sashaying or strutting your stuff, all because you incorporated a petticoat into your costume or everyday wardrobe. This mint tulle petticoat has all the fluff you’ll need. The beautiful mint color is unique and can be used for any sort of green costume. Teenage Mutant Ninja Turtles, Poison Ivy, or a leprechaun costume would all benefit from the help of this versatile accessory. Put on the stretchy elastic waistband petticoat and get ready to work it girl!