Let your child become the fastest member of the Lion Guard in this Lion Guard Fuli Classic Kids Costume. 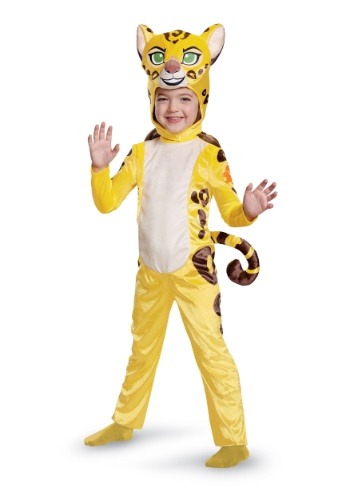 Does your kid delight in being the fastest cat in her class? When she plays tag does she delight in chasing down the other kids with bursts of speed, just like a cheetah? She would probably do pretty well in she was a predator on the African safari. Who knows, if she was at the right place at the right time she might even get invited to be one of the members of the Lion’s Guard. While you’re happy that your daughter doesn’t have to deal with hyenas and crocodiles in her day to day. With all the hijinks that can happen in the Serengeti, we’re sure danger is plentiful. Although, it would be a pretty amazing challenge. Your kid would be running ahead of the prideful cub, Kion and playing with the fierce honey badger, Bunga, though she would probably smell pretty skunky after that. She might even bring Timon and Pumbaa back for dinner so you’d probably need to keep plenty of bugs handy. We hear they taste like chicken. Your little one will easily transform into the confident cheetah in this yellow jumpsuit. It has beautiful cheetah spots all over the back and arms with the Lion Guard badge on the left arm. The transformation will be complete once the hood is secured around her head. The sculpted cheetah features Fuli’s intense green eyes and alert nose and ear. Who knows? Once she’s in the costume she might be faster than ever. You know, mind over matter!

Your toddler will love dressing up as his favorite character from the Lion Guard in this Deluxe Lion Guard Kion Costume! 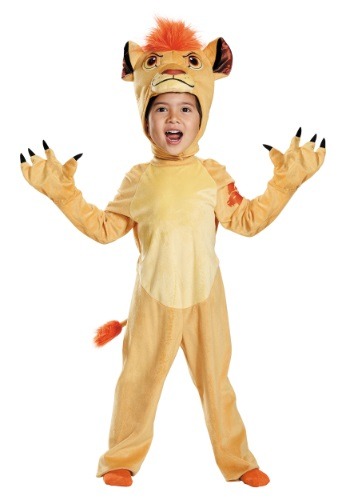 Waiting to be the king has got to be tough, but luckily the savannah around Pride Rock has plenty of excitement if you know where to look for it. Your little lion cub can join the fun faster than they can say “Hakuna Matata” in this Deluxe Kion Costume, from Disney’s The Lion Guard! As the Prince of Pride Rock, Kion has pretty big shoes to fill (or he would, if lions wore shoes) when his father, Simba, retires from being king. That won’t be for a while though, so in the meantime, Kion and his friends protect the Pride Lands as the Lion Guard. But, what do they do on slow days, when there aren’t any troublemakers to stop, or anyone to save from danger? They probably play games of baobab ball and swim in the watering hole, and maybe they even have singing contests. We bet Kion’s “Roar of the Elders” power also gives him a wild singing voice! While this costume won’t quite give your toddler a legendary roar, it will give them the ferociously fuzzy look they need to keep the Pride Lands safe! The cozy jumpsuit features a stuffed tail in the back and Kion’s unique paw marking on the shoulder. The matching hood is shaped to look like a lion cub head, with Kion’s face printed on the front, and big soft ears and an orange mane on top. Your little cub will have a hevi kabisa (or “totally intense”) time prowling and playing around in this fiercely adorable outfit!