Who doesn’t want to be able to “blink” through time and space?! Let your child be their favorite Overwatch character when they wear this Overwatch Tracer Deluxe Girls Costume. 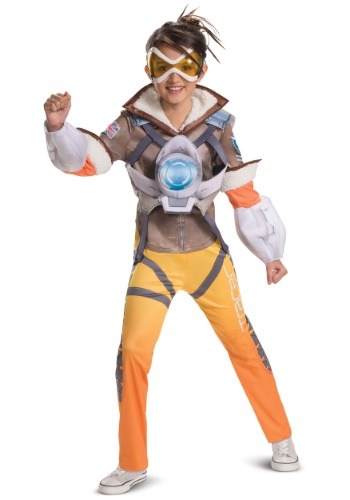 Get into the gameTime to get into the game! She is a gamer, right? We’re sure your girl spends hours as a gaming champ, playing all the most popular titles. If Overwatch is one of her favorites, she probably has a favorite character selection when she’s teaming up with her friends to battle online. And if her favorite character happens to be Tracer, well, we’ve got just the thing for Halloween!That’s right, this year we think she oughta suit up as Tracer herself! This costume will let her do just that, and with signature video game style brought to life, she’ll be ready for real-time action. Of course, she won’t be battling opponents, she’ll mostly be focused on trick-or-treat candy and the neighborhood costume party. But when she attends in this costume, she’s going to be feeling like an Overwatch champ!PRODUCT DETAILSThis Kids’ Tracer Deluxe Costume is designed as a costume jumpsuit, fully printed with signature details, and features gauntlets attached at the elbow. A polyfoam backed vest slips over the jumpsuit and also features printed details to replicate the character’s digital appearance to a tee. Just complete the look with the included goggles, your own sneakers will work just great. After all, you’re gonna want to be prepared for battle, should you have to zip around the party to blast bad guys!All of the most popular themesThis Overwatch Tracer Deluxe Girls Costume is gonna be a whole lotta fun for a young girl this Halloween. Of course, if you’ve got other members of the family to get into costume, we’ve got plenty of choices for them, too! We’ve got styles from top-selling video games, as well as all the most popular tv shows and movies. So, get your styles all set, and let’s go win Halloween!

Your child will be sneaking up on his enemies and unleashing his shurikens like a pro when he wears this Overwatch Genji Classic Boys Muscle Costume. 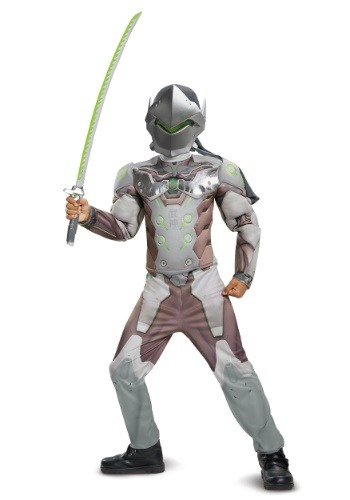 Cool ShinobiCan you think of any cooler than a ninja? That’s basically impossible. Ninjas get to carry around a katana, they get to hurl shuriken at their enemies, and they even get to learn secret ninja techniques that allow them to sneak up on any bad guy! How could anything possible beat the mighty ninja when it comes to cool-factor? Well, what we’re about to tell you might be a little difficult to believe. We know of one thing that beats ninja…Cyborg ninja! Yeah, Genji knows the deal. Not satisfied with being just an ordinary ninja, he became a half-robot, half-ninja hybrid! Alright, so maybe he and his brother got into a deadly fight that left him on the brink of death and becoming a cyborg ninja truly was his only option, but that’s beside the point! He’s definitely cooler as a cyborg ninja than just a normal ninja. It’s no wonder that your child wants to become the Overwatch character this year!Product DetailsBased on the iconic video game character, this boys Genji costumes comes with many great details that will please any young Overwatch fan. It comes with a jumpsuit that has molded armor pieces attached to the top. It also has muscle padding in the chest and arms to give your child a buff and tough look. The bottoms also have printed armor The included hood fits over your child’s head and the molded mask fits with an elastic band to top it all off!Grab Your Ninja SwordOnce your child has this costume on, he’ll be ready to cosplay as the coolest ninja-robot hybrid ever conceived. Just make sure you pair this costume up with a good toy katana. Genji never charges into battle without his trusty wakizashi! Also, be sure to check out our other Overwatch costumes to create a whole team of skilled fighters! 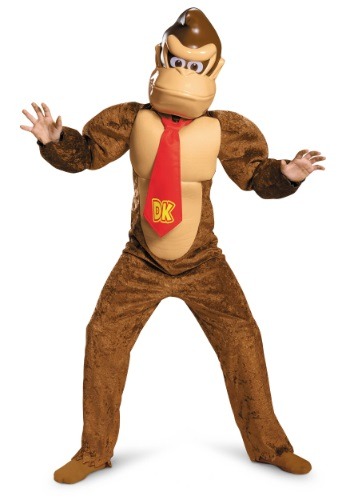 It doesn’t matter if he’s been hanging out in a construction site, the DK Jungle, or even a high octane MarioKart circuit track—wherever Donkey Kong hangs out, he’s a large and in charge character. If your child would like to step into the Nintendo universe, let him do it with this deluxe Donkey Kong costume.It might be every child’s dream to hang out with Mario, Link, and all the other Nintendo universe big wigs, but when you choose this deluxe costume, your little one will be able to be a legitimate heavyweight in the video game world. And even though he might look more like a junior Kong in training, but we’re sure he’ll still be able to roll barrels or pilot that kart with the best of them!Including a plush velour jumpsuit, headpiece, and tie, this costume will let any child transform into this iconic video game character with ease. Soft sculpted chest pieces are attached to the jumpsuit to give your guy the look of a serious Nintendo character. Attach the vacuum poly-formed front mask to complete your child’s video game transformation, and when the signature DK logo tie is secured to his neck, well, he’s going to be one dashing looking ape. Get your child this top flight Nintendo look, and we’re sure your household will be bananas in no time!

He can give Mario a run for his money with this Donkey Kong child costume kit. It will make him look like the popular Nintendo character. 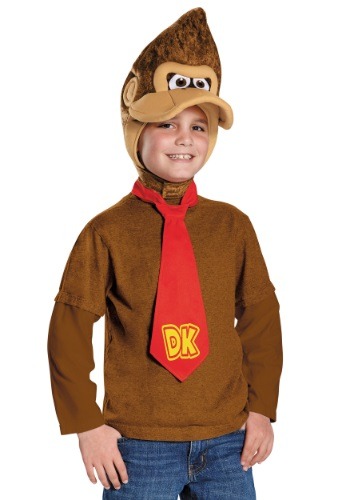 One day they’re crawling around the playpen and the next they’re throwing barrels at plumbers and racing down Rainbow Road against Toad and Princess Peach! Yes, your child is growing into a Nintendo fan and his character of choice in Mario Kart is none other than Donkey Kong, so you can probably guess which video game character he’s going to want to dress up like at his next costume party. This Donkey Kong Child Kit comes with everything you need to turn your kid into the ape from the games! Just make sure that you have a large supply of bananas and a go-kart ready, because your young one is going to need both of them if he wants to fully get into character as his favorite barrel-tossing video game pal!