The Inflatable Jabba the Hutt Decoration is going to grab the attention of all the trick-or-treaters this Halloween! 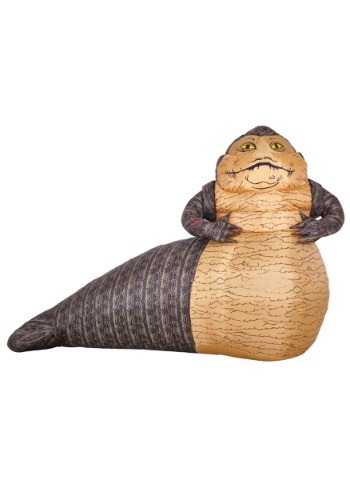 KEEP YOUR ENEMIES CLOSEJabba Desiligic Tiure is evil.  It’s probably nothing that needs to actually be said, given the fact that the guy looks like a giant evil slug monster, but we do encourage folks not to judge others by what they look like.  It is a vast galaxy and there are many types of folks out there, after all!However, in the case of Jabba the Hutt, the looks do not deceive and this guy is as slimy as they come.  Huge member of the Grand Hutt Council and friend to the Crymorah Syndicate and eventually a big deal of the Shadow Collective, there isn’t much darkness in the world that Jabba doesn’t have his pudgy fingers into.PRODUCT DETAILSMake sure you can watch this guy’s every move with this Inflatable Jabba the Hutt Decoration.  This 6′ by 10′ inflatable creampuff will be one of the biggest sites for your local war of the stars.  Fortunately, it comes with a fan that will get the guy full of hot hair without taking out your lungs.  Remember, if you need to kill him to focus on strangling.  Knives will be a little too permanent! A GIANT SLUG YOU WANT IN YOUR GARDENNormally, it is kinda important to keep pests out of your house and yard.  But, when they are giant masters of a galactic crime syndicate, sometimes, there might be a few advantages to keeping them around.  Try your luck with this Inflatable Jabba the Hutt Decoration.  Warning:  May attract slave girls.

There aren’t many things scarier than a giant spider on your lawn. So, there is no doubt you will have the scariest lawn around when you add this Inflatable Black Widow Spider Decoration. 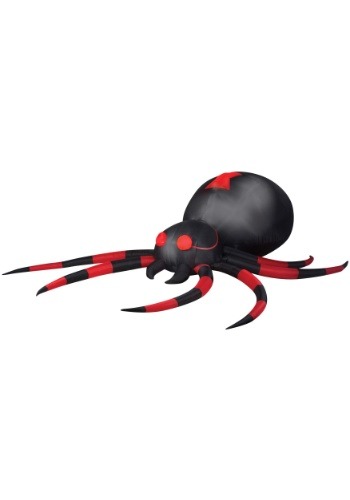 In a SpinWhat is it about spiders that make human minds spin? They have been inspiring fear, inspiration, and a little bit of awe for all of our history. They are in nursery rhymes, scaring little girls and crawling up spouts. They take up major roles in ancient mythology throughout the world. In the Native American Hopi culture, all the living creatures of the world were created by the goddess Spider Woman when she paired up with the sun god. With their ability to create webs, spiders have been woven into tales with mostly positive connotations. But even with all these positive ideas, let’s not kid ourselves. We all know that if we ran into a giant spider, we’d run as fast as our little legs would carry us. We wouldn’t be thinking of the wonder of the web or the graceful nature of these eight-legged animals. We would be wondering how long it’ll take to seal up the doors and windows of our houses until we know that someone has taken that monstrous arachnid out for good!Product DetailsAt fifty-one inches tall and one hundred-thirty-two inches tall, this is no itsy bitsy spider All you need to do to make your yard into an arachnophobe’s nightmare is plug it into an AC outlet and turn it on. The spider lights up so that your trick-or-treaters can get a good look even when it’s dark outside. It has tethers and stakes so you don’t have to worry about you creature escaping in the autumn wind. Just make sure little Miss Muppet knows about your new companion before she comes over for her curds and whey. A Wicked Web to WeaveIf you’re looking to become the spookiest house on the block, look no further. Ghosts and ghouls are nothing to this red-eyed spider. Drape classic spider web material over bushes and trees to make your arachnid feel right at home and finish the look. This Halloween, get ready, you just might catch a few thrill seekers in your wicked web!

This scary inflatable cat with a moving head is a classic Halloween decoration. It inflates automatically when you plug it in! 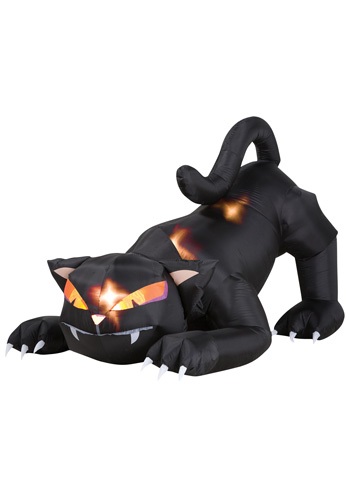 You know, they say that dogs think they are people and cats think they are gods. Well, if that’s true then this demonic looking puddy cat must think that it’s the overlord of the underworld. Just look at the ferocious look on this feline’s face, absolutely terrifying… and yet there is still something about this kitty that really makes us want to give it a good cuddle session. Hopefully your guests this Halloween don’t have the same temptations to pet this evil little guy. You never know when its devilish nature is going to be unleashed!If you want to have the best-decorated house on the block this year then this Inflatable Cat with its moving head is the perfect addition to your haunted scene. Set up is simple, it inflates automatically after it’s plugged in. Just make sure to warn all the trick or treaters about this beastly six-foot-long black cat, crossing its path at the wrong time could lead to a whole truckload of bad luck!

The Inflatable Reaper & Carriage with Sound is a great piece for your Halloween setup. 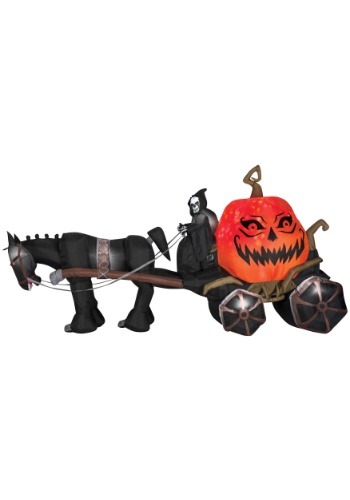 A Tale to TerrifyWe all know the one about Cinderella and the pumpkin carriage. A less popular story, much less exciting for little princesses everywhere, is the one starring the Grim Reaper and the haunted Jack-o-Lantern. Yes, there’s still a ball involved but the premise is closer to Poe’s Masque of the Red Death rather than the fairy tale we all grew up with. And while there were still ladies wearing pretty gowns twirling around with princes and dignitaries to orchestra music, the events that happened when the clock struck midnight created an entirely different ending to the tale! While you might not want to tell this sinister story at bedtime, displaying this spooky image in your yard is sure to make an impression on the neighborhood! This creepy carriage with its intimidating driver hints at a terrifying tale that both young and old will have to fill in with their imaginations. And you know that’s where the devilish details lurk!Product DetailsAt seven feet tall, this Halloween display is sure to send shivers down the spines of anyone who dares pass. It leaves quite an impression during the day but it gets even better, the pumpkin flaunts swirling strands of light at night so that it can be seen from far off. While the site of this inflatable display is enough to be the talk of Halloween night, it also plays creepy noises and taunts, inviting people who can’t yet see your yard’s ghastly visitor to investigate the creepy noises. The display is scary, to be sure, but the cartoonish skeleton face of the driver and the bright orange of the pumpkin, carefully stay on the side of playful so that the smallest trick-or-treaters can get to your door with only a delightfully frightened squeal. Ticket to RideThere’s no way we would hop into this pumpkin carriage, even if we had a golden ticket to your ride. But we would be delighted to have this carriage stop in our neighborhood just for a delightful case of the heebie-jeebies. How about you, do you need a ride?