How are you going to fight the forces of evil without this adult deluxe Green Lantern costume? Without the classic superhero uniform, there’s no way you can harness the power of Oan energy. 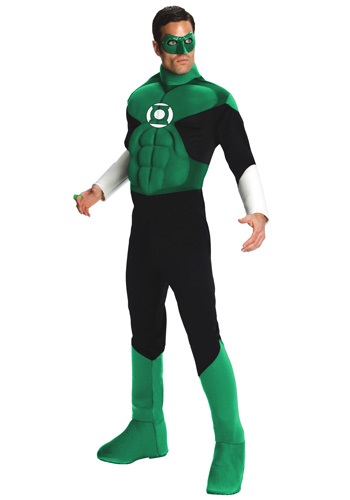 You can spend all day trying to materialize constructs out of thin air using your willpower, but it probably won’t work unless you’re a fully sanctioned Green Lantern. We got the uniform just waiting for you, but you might have to ask the Guardians to give you a real power ring if you want to fully harness the might power of Oan energy.

You now can have your very own superhero in the house when your little one dresses up in this Kids Deluxe Green Lantern Costume. He’ll just have to save the world before bedtime! 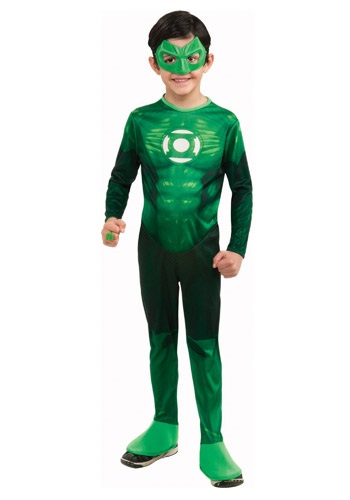 Did you know that “Green Lantern” technically doesn’t just refer to one superhero character, but that it’s actually the name of a number of superheroes (appearing exclusively in DC Comics, of course)?And did you also know that Hal Jordan was not the original leader – thus unofficially known as The Green Lantern) of Green Lantern? That was Alan Scott, who was created in 1940, right when superheroes were becoming super (geddit?) popular. Alan Scott usually fought the usual common criminal in New York City, aided by the magic of his ring, which granted him a variety of extraordinary powers. Tough luck for Alan, though, because the publication of his character ceased in 1949, when comic books lost some of their mass appeal (a.k.a., television started being a thing). But don’t cry for Alan-tina…in 1959, as a way to wrangle the surging fascination with science fiction, the Green Lantern character was reinvented as Hal Jordan, an officer for an interstellar law enforcement agency known as the Green Lantern Corps. Additional members of this agency, all of whom call themselves Green Lanterns, were introduced steadily over time. Together, they’ve taken on the evil Sinestro time and time again and also joined other superhero buddies in stopping the Legion of Doom from taking over the world.Which is all to say: There’s a spot open in the Green Lantern Corps, and if your kid is ready to fill it, then we’ve got their costume pressed and ready for action! Just have them slip on this o officially licensed Kids Deluxe Green Lantern Costume, slip on the included eye mask, and power up that Green Lantern plastic power ring, and they’ll be ready to shine the light of good over all evil! (Just make sure they know that they’ll have to save the world before bedtime!)