Look like the good natured creation with the help of this Edward Scissorhands Makeup. It’s officially licensed, straight from the laboratory of The Inventor. 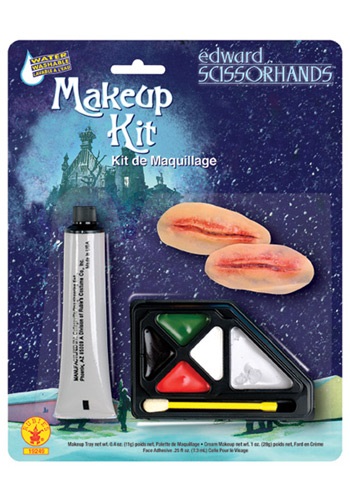 We’re not gonna mince words, having scissors for hands does not sound fun to us. They could definitely be handy if you worked for a landscaping company, or in a gift wrapping factory. But if you have to do literally anything else, like open a door or scratch your nose, they just aren’t going to cut it. Well, actually the whole problem is that they WILL cut it. You know what we meant.As problematic as having scissory mitts would be in everyday life, “Edward Scissorhands” is still a wicked-good movie, and dressing up as the title character is a bunch of fun! But, Eddie’s pasty, scarred up face can be a hard look to get just right. Luckily, if you’re planning to dress up as this modern day fairy tale character, you can use this Edward Scissorhands Makeup kit to help with your complexion. This kit contains the proper makeup colors and fake scars you need to look like an artificial human with hands of sharp steel, but a heart of gold. Now we just need to work on your shrub trimming skills… 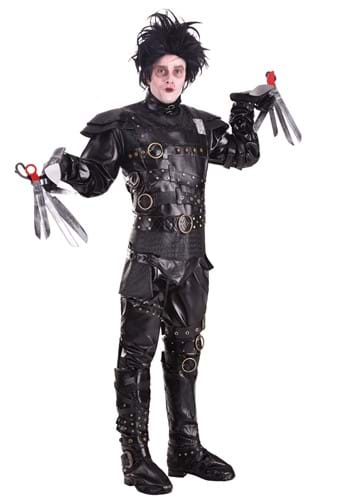 You see, before he came down here, it never snowed. And afterwards, it did. If he weren’t up there now, I don’t think it would be snowing. Sometimes you can still catch me dancing in it.On a hill overlooking a town is a large old house where an inventor created his masterpiece but he never had the time to finish it. This left Edward without real hands and having to live with scissors for hands. Now you can look just like the kindhearted creation when you wear this Grand Heritage Edward Scissorhands costume. This is a great look for fans of the classic 1990 film. 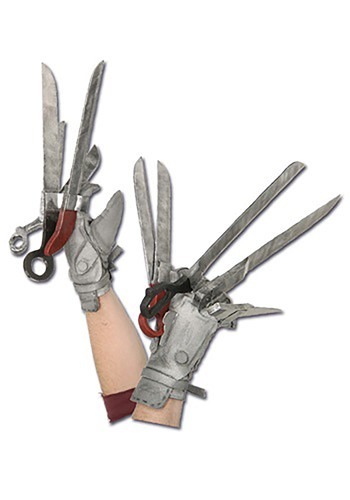 Burton creates some crazy fascinating characters. We’re talking hatters that are neon and crazed, Halloween kings, re-animated brides, and of course, the boy with scissors for hands.If your’e attempting to recreate a costume of Burton’s complex macabre creations, you might have a hard time. Particularly with Mister Scissorhands. But before you start dismantling scissors and gluing steak knives to your knuckles, consider our Deluxe Edward Scissorhands Gloves. They’re simply black and gray gloves that you pull on over your normal human fingers. Over the fingers on the gloves are plastic scissor blades attached for the full effect! Well not full effect. These gloves will not allow you to trim hair or shape shrubbery. But hey, you’ll look like the morose teen, just without the danger of cutting yourself.

Take your gardening hobby to the next level with this Women’s Miss Scissorhands Costume! It’s spooky, sassy, and will have everyone talking this Halloween. 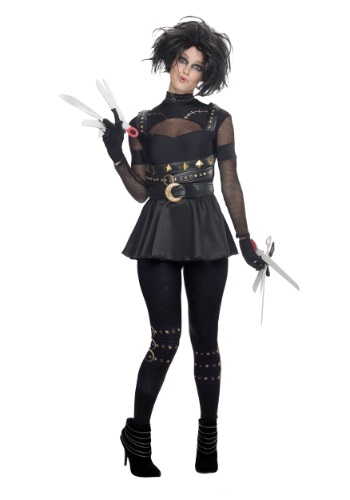 Sure, the movie was all about a male named Edward Scissorhands, but when it comes to Halloween, anyone should be able to get in on the fun! That’s why this Miss Scissorhands costume exists. It’s not straight from the movie (but then again, none of us are Johnny Depp, either!) but it’s a really cool and detailed take on the beloved Tim Burton character. Don’t let anyone tell you that you can’t be the famous mute gardener… because you can with this womens costume! Oh, and don’t worry, the scissors are soft so no unwanted cuts… you can party in peace and not pieces.

When you’re a successful hair dress, it’s important to show off your particular style. You’ll have the coolest hair (and sweetest heart) in town with this Edward Scissorhands Wig. 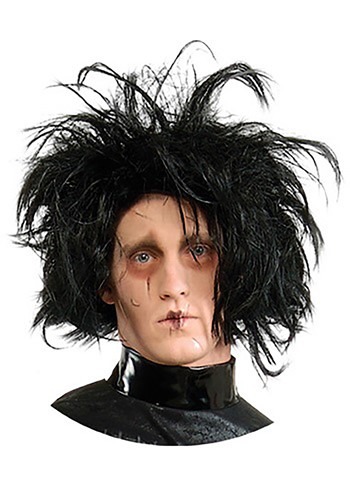 We know that you are not really a bad guy…you happen to be just a bit misunderstood…by everyone. But you have a heart of gold, and we can see that. Hey! That sounds just like our good friend, Edward, who lives up in an old abandoned (creepy) house above our (equally creepy) pastel suburbs. Maybe we can have you both over for a barbecue and you could channel his look this Halloween! He’d like that. Though, when you’re dressed as Edward Scissorhands, you may not possess the same in-demand hair cutting skills that he does. To avoid mishaps, you can get this Edward Scissorhands Wig and nail Ed’s look without giving yourself a bald spot. We don’t know what to tell you when folks start asking you to design elaborate hedges for them. Perhaps tell them that your blades need sharpening and you’re not accepting new clients.

Wearing the tween Miss Scissorhands costume is like being the character from the movie, minus all the angry mobs at the end. Also, having fake scissors for hands is way less dangerous than having real ones. 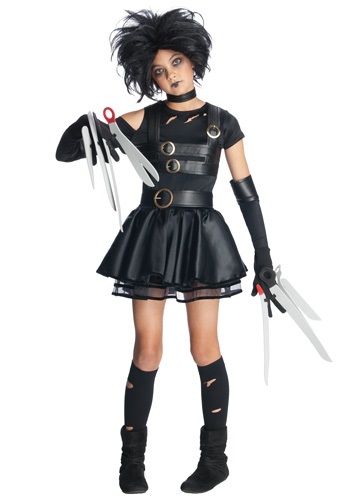 What was that scientist thinking when he chose scissors as a viable alternative to fingers? Sure, you can do plenty of cool things with scissors for fingers. Styling hair, trimming the hedges and cutting construction paper comes naturally, but things like eating without poking yourself in the eye, combing your hair, and high fives become a real drag. It’s still better than having chainsaws for hands like Timmy Chainsawhands from the castle down the block.We digress. What we mean to say is that having scissors for hands is actually pretty cool, and anytime you can wear scissors as a fashion statement is sure to be an excellent time. Even if it may make things like zipping up a jacket or pants a little difficult, they look cool enough to more than make up for the small inconveniences. Ah, the things we sacrifice in the name of fashion!If she’s ready to give some extra sharp hands a try, this officially licensed teen Ms. Scissorhands costume will have her ready for a night on the town! The black polyester costume dress has a three-quarter-length sleeve and one short sleeve and features gold-tone buckles for added detail. It comes with the wig included, too, so she can get the hairstyle that’s looks just like the one the original Edward Scissorhands Sported. And, of course, this ensemble includes the best, too, the pair of black gloves that have polyfoam scissor knives attached to each finger. That’s sure to have her feeling extra sharp!

Instead of asking your doctor to remove your hands to put scissors in their place, you should probably just get this Edward Scissorhands costume. It gives you the same look without all the inconvenience of having scissors for hands. 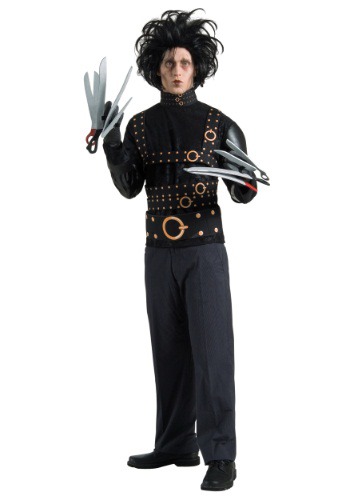 So you’re feeling a little ostracized, are you?It’s alright. Plenty of artistic geniuses and mad scientists often get excluded from cookie-cutter suburbia. Frankenstein and his monster were run out of town quite quickly. No one appreciated Dracula’s tastes. And here we have Edward Scissorhands. He tried to fit in but he couldn’t. Maybe it was because of his mad slicing skills. Maybe it’s because he didn’t socialize well with all of the housewives. Maybe it’s because he could never put his hands in is pockets.Regardless, many famous creative minds didn’t fit in when it came to “normal” people. Personally? We think that’s excellent. Life is far too boring if everyone acts and thinks the same. Following proper etiquette? Boring! If everyone dresses in the same styles, has the same hair and make-up, and has their tea the same way, they may as well be a clone army. But you, you’re out to be different, aren’t you? You stand out from a crowd with your strange skills and unique look. That’s fantastic. We hope other people will one day feel the same. Maybe they will in our Edward Scissorhands Costume. It’s got the jacket with faux leather accents, gloves with foam scissor fingers and a black wig to look like our dear eccentric Edward himself. In this outfit, they will feel like the creative tortured soul we all know and love. Then they can feel and look just like us!