It’s about time the world saw these Isle of the Lost girls as the fashion icons they are, those pretty princesses are just jealous. This Halloween any Evie fan will love this cute ensemble whether they’re hanging with the Evil Queen or practicing their ch 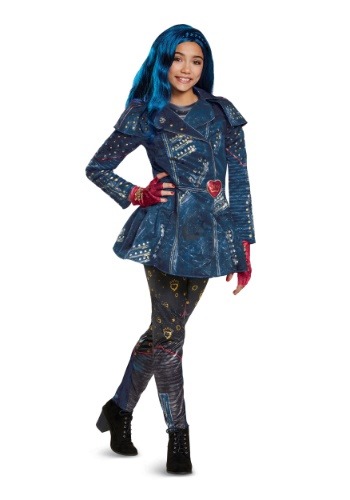 You’ve got to hand it to Evie, she grew up on the Isle of the Lost with the Evil Queen for a mother and yet she seems to have more goody two shoes than villain about her. Sure, every once in a while she gives in to her inner rebel but at heart, she’s a kind and innocent girl next door type.These days she’s learned that there’s more to life than finding her Prince Charming, who turned out to be pretty conceited anyway. Now, she’s enjoying high school away from the Isle of the Lost and developing those chemistry skills she inherited from her mother, the evil queen. Poisoning an apple is a no-no, using those skills to get A’s in high school? Definitely a good thing. The baddest thing about Evie? Her wardrobe. We mean bad in a good way, of course. We don’t know who the designer on the Isle of the Lost is but honestly, if the mainland wants to ban them there, it’s their loss. All the teens on the Isle have a cool style but it’s Evie who has a light romantic touch to all of her ensembles.We wouldn’t blame anyone for wearing elements of this costume in their day-to-day. The jacket tunic has tough zipper and stud elements while remaining sweet with heart and crown decals. The leggings layered underneath have a heart, crown and apple pattern. And when the temp rises Evie’s style will remain complete with the heart and crown T-shirt, super easy to integrate into a weekly wardrobe, it still maintains that tough villain flair. So, whether working on chemistry or feeling out the chemistry of a Halloween party, any Evie enthusiast is going to feel proud to come from the Isle of the Lost in this ensemble.

You child will rule Auradon Prep as Mal from Descendants 2 in this deluxe girls costume. 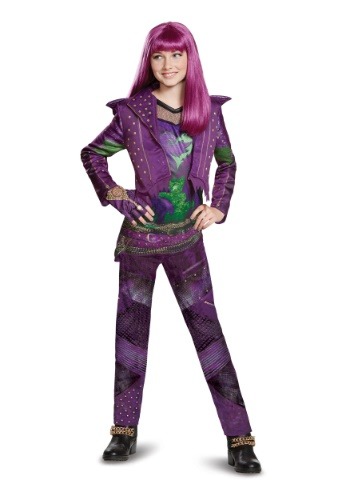 If your daughter ever tends to complain about her life at home, turn her attention to the life of that ever fabulous high schooler of the Isle of the Lost, Mal. She might be popular but she has one of the most difficult mother’s anyone would be able to think of: the evil fairy from Sleeping Beauty, Maleficent! Talk about a difficult to please role model, impressive bad behavior is kind of a requirement. Mal has plenty of power, she’s pretty good at casting spells when she needs to. While she’s charmed her way off the Isle of the Lost she still feels pressure from her mother, the mistress of evil from afar. Other than protecting her high school from a flood of escaped villains this sly girl mostly uses her powers to give awesome makeovers to her friends and classmates that are willing to pay for the outlandish colors she can provide. If you’re asking us she’s giving them a deal asking 50 bucks for a damage free dye job. We get why your daughter wants to dress like this Isle of the Lost castaway. She’s got a pretty eye-catching style, wearing a purple and green jacket with gold metal studs and zipper detail. Her T-shirt hints at her evil heritage with a murky pattern and a dragon heart. Her pants have the same gold zipper detail and are edgy with different shades of fabric. Top it all off with that Isle of the Lost fingerless glove and your girl is good to go. Now, if only she could decide to work for good or evil! 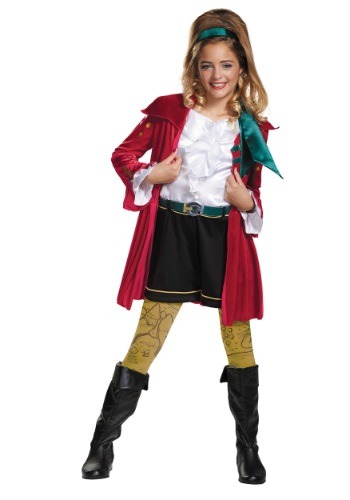 What’s a kid to do when their parent is an infamous villain? Easy, try to become an even more infamous villain! Your kid is going to have a wicked time dressing up in this CJ Deluxe Costume, from Disney’s Descendants: Wicked World! At first, you may think CJ Hook is a sinister, deceitful trickster. And, you’d be mostly right. The only thing she might add to it is that she won’t stop until she is the most sinister, deceitful trickster in all of Auradon! She has set the bar pretty high, though, since she’s the daughter of the evil Captain Hook, but she inherited many of her most “charming” qualities from her dear ol’ dad. She is a bit of a prankster, and doesn’t mind pulling cons and working in the shadows to get her way. But, as bad as she acts, she’s pretty popular, and she’s good at getting her friends to do what she wants.She may not have a ship to captain like her father, but she’s definitely got the mind of a pirate, as you can see by her swashbuckling sense of style. The frilly shirt is attached to the skirt-like shorts and belt, which look quite dashing with the red velvet pirate-style jacket and sea green head scarf. The included tights are printed with treasure map details, adding a splash of adventure to the look. Find a pair of flamboyantly cuffed pirate boots, and your girl will be ready to cause some trouble. Being bad has never looked so cool! 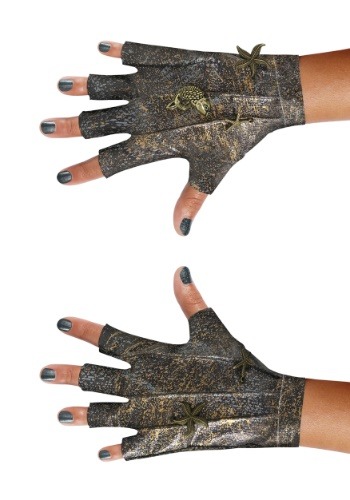 Powering UpDoes your little one want to live on the Isle of the Lost from the hit Disney movies, The Descendants? We totally get it. Other than a top-notch education we don’t understand why anyone would live on Auradon. It’s full of rules, making sure that everyone tries and fits in. Poor Mal is bending over backward so that her prince thinks she’s normal. Why is she even trying, everyone knows she comes from villain stock. Uma would never try and pretend that she’s anyone she’s not. She comes from Ursula, working at a fish and chips shop and running a crew of young pirates. We’d say her wild lifestyle beats bowing and curtseying in Aurodon court any day!Product DetailsYour little one can get in touch with her tough, villainous side with this pair of metallic gloves. All the cool baddies on the Isle of the Lost have their very own style of fingerless gloves. That’s why this accessory is a must for any Uma costume this year. Say Her NameWhen it comes to social life on the Isle of the Lost, Uma is the star. We get it, her sense of adventure is a lot of fun. Your little Uma can either pair up with the girls from Auradon or suit up with the rest of her pirate crew. So let her suit up with the Uma costume and accessories and watch as she takes control!

Complete your Mal costume from the movie Descendants 2 with this officially licensed Mal child glove. 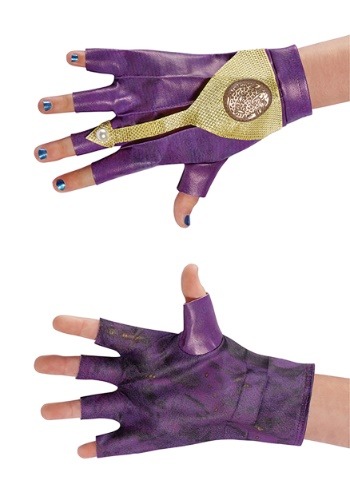 Feeling SaltySweet and salty will always be a hit flavor. The snack aisle is a chorus of sea salt caramel, bags of raisin and peanut trail mix, and chocolate pretzels. What’s our point, you might ask? Makes sense, since this product is about Descendants Two and not trail mix. Our point is, Mal treads that line quite perfectly… well until her life starts to unravel, that is. She might be going to school in Auradon Prep but that doesn’t mean she’s going to leave her interesting gritty, magical side behind. You can tell she hasn’t forgotten where she comes from by what she wears, especially by her fingerless gloves. Designed by her best friend, these gloves describe her complicated personality to a “T”!Product DetailsThese officially-licensed purple gloves are from the second Descendants movie. The pair has a faux leather look that’s finished off with a metallic sheen. The top has seems as well as gold fabric with a metallic stamp on the top and a pearl ring on the middle finger. When paired with Mal’s tough jacket, your little one will feel like she just stepped out of the hit Disney movie. Power PlayIs your kiddo ready to take her place at Auradon Prep? These gloves will finish off her outfit perfectly. Once you help her pair up with friends like Uma and Evie and dress up time will be loads of fun!

Return to the Isle of the Lost in the Descendants 2 Mal Child Prestige Costume! 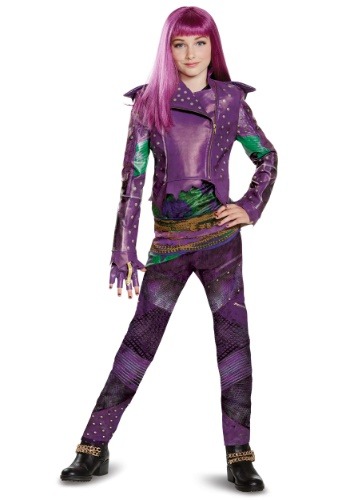 Trading Fiends for FriendshipWe all know that it can be tricky to leave bad habits behind. In Disney’s Descendant’s 2 Mal learns that lesson over and over. She’s torn between two worlds. Does she continue to try and make her mother, Maleficent, proud? Or should she embrace this new opportunity to go to school, making friends with the noble, nice, yet sometimes hoity-toity folks around her? Well, it wasn’t a surprise to us when her first crush made up her mind. She flip-flops with the pressure of fitting into such a “perfect” world, of course. Why shouldn’t she use the magic and talent she was born with? Just because it intimidates others? Well, sooner or later she’ll learn to balance the good and the gritty. Cause who wants to be a pretty princess when she can be so much more powerful?Product DetailsEvie’s been at her fashion-design best again with this dark purple ensemble. Your child can flaunt all the intricate layer with a separate tank and jacket and straight leg pants. The top contributes to Mal’s rockstar personality with a sheer neckline that zips up the back and an asymmetrical hemline that’s printed with chains. The jacket is just as cool with 3-D dragon wings attached to the back, a real zipper, and printed zippers and studs throughout the rest of the design. And of course, your kiddo can’t be from the Isle of the lost without one of Evie’s custom-designed fingerless gloves.Wicked in Design OnlyWith a costume as high-quality as this one, your child will feel like she stepped off the screen and into reality. You might even find she wants to use this look to reenact her favorite Descendants song for the school talent show. Just remind your child. Mal’s style might be wicked cool but in the end, she always chooses good.