We don’t know everything that happens during a typical day in for a munchkin. But we do know that they like lollipops, so try carrying one with your costume to be more authentic. 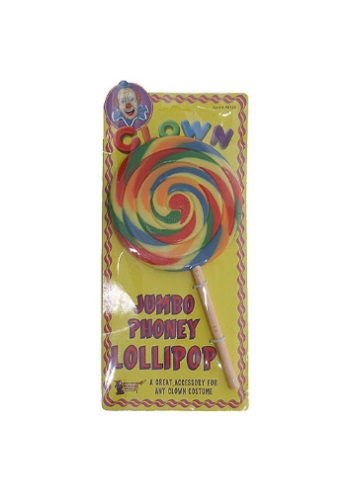 The Lollipop guild is nothing to giggle at. Although, plenty of giggling goes on there. Members of the guild take their job very seriously. So when it comes to creating giant lollipops, they are sure to create the most colorful and the most lovely lollipop out there. Even if it’s not actually edible. This made for a confusing experience for a lost Kansas girl that landed in Munchkin turf, but you’ll find a giant inedible lollipop is good for a lot of things. Unlike sugar pops, this candy stick is water resilient. Which makes this a great lolly for rainy clown parades. Now you can gesticulate wildly, candy in hand, without worrying about it getting stuck in your colorful clown wig, or for that matter you neighbor’s rainbow curls. This lollipop can be used again and again and is resistant to the strongest sugar fiends. If you happen to drop in on Munchkin land carrying this quality giant lollipop, they might just make you chairman of the board.

This Lil’ Jester Costume is for the baby who’s ready to do some clowning around! It’s a cute and funny look for your little one. 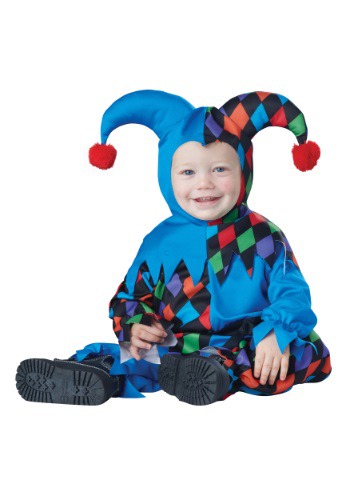 You know what we’ve always wondered? How exactly, in the days of old, did one score a job as Jester in the royal kingdom? Was it a word of mouth thing? Did everyone in the royal kingdom simply know and talk about who the funniest person was in the land, and then finally the word got back to the king and the king was all, “Yo, come perform for my royal court!”? Or did the Jester have to get his start performing at small village carnivals, spend years on the road (or path, since back then they didn’t really have many roads…) and work his way up to the big time? Or were there Jester auditions? And what were those like? Just a bunch of jangly-headed jokers standing around, waiting in line for their turn to do a solid 15 minute set for the guy who could make or break their Jester career (and neck, tbh)?And what was the job security like? Was it like Vegas, where you got a 3 year residency at the court? And when that was over, maybe you took a long vacation – y’know, rest up from the grind of performing day and night from the king – or pounced on the momentum you’ve build up by scheduling a big kingdom-wide tour? Honestly, the more we think about it, the more questions we have.But the one thing we don’t have any questions about is whether or not this Lil’ Jester Costume will bring in the laughs. The brightly colored jumpsuit comes with a pullover hood with poms on the end, making every movement your little jokester makes instantly hilarious. Use this costume for an adorable addition to your Renaissance theme group, or for any cute little prankster in training!

These Harlequin Elbow Length Gloves look like some sort of optical illusion. 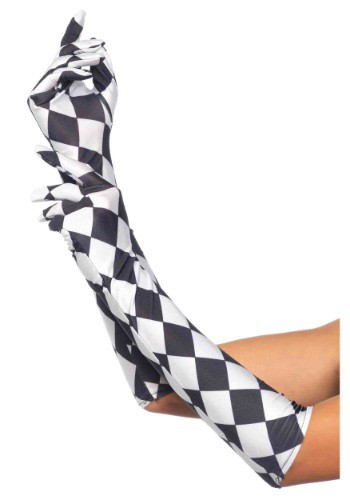 Have you ever been described as a trickster? Do you perceive yourself to quite a bit more intelligent and aware than others? Are you a romantic deep down? Well, you seem like a character right out of a play! To be more specific, you seem like the stock character known as the Harlequin! Why not bring this character to life off of the stage and into the party scene this Halloween! All you’ll need to do is basically be yourself and then cover yourself in checkered apparel.A great place to start this theatrical transformation is with these Harlequin Elbow Length Gloves! Once you get your hands on (or in) a pair of these gloves you can worry about the rest of your costume. You’ll have to make sure to get the classic half-mask that Harlequins normally wore on stage as well as a hat similar to a jester’s. Then you’ll be ready to do cartwheels and somersaults all around at the next costume event you attend. Maybe you’ll even help two star-crossed lovers live happily ever after!

Complete your silly carnival clown costume when you add this Blue Clown Derby Hat with Flower to your wacky outfit. 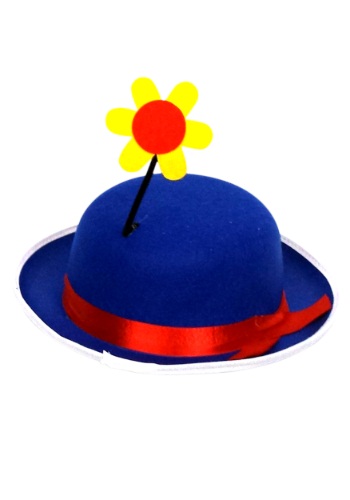 They say the clown makes the clothes, not the other way around. Actually, outfits do kind of make the difference between a funny clown and just some person acting really creepy at a kid’s birthday party, but that’s an argument for another time. Clothes also play a very important role in determining what type of clown they are, so in a way, the clothes do make the clown. The difference between a creepy clown and a silly one might be as simple as a funny hat or some big floppy shoes. When you are looking for the right accessory to top off your clown outfit, this Blue Clown Derby Hat may be just what you need. This goofy, fun-looking hat will add some classic style to your costume, along with plenty of color to go with any type of clown outfit you have put together. Now, you just need to decide what kind of clown you want to be!

This striped costume shirt makes a great mime costume for adults. This is a very versatile costume for both men and women! 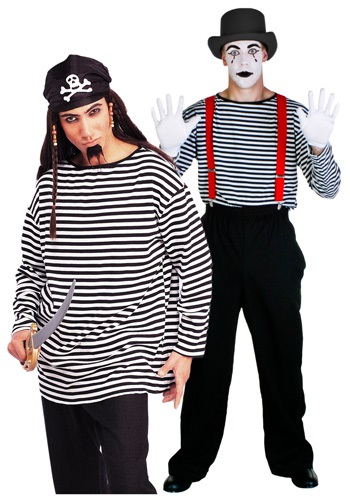 Planning on dressing up as the most feared pirate in the seven seas? Maybe you want to be a prisoner on the run after an epic jailbreak. Or perhaps you really want to show off your amazing miming skills this Halloween. Well before you can do any of that, there is one thing that you absolutely need. Check out this awesome Striped Costume Shirt!This shirt will be a perfect addition to a variety of different costumes. So if you’re someone that doesn’t like to spend a whole lot of money for one night, this shirt will be perfect for you! With this one shirt, you have an amazing base to work off of. You can surprise all of your friends this year when you switch costumes three times in one night! Just take a look at the rest of our accessories and find a few fun and defining props to add to this Striped Costume Shirt. You’ll be ready to make plenty of quick and easy transformations for this coming Halloween season!

Slip into a pair of affordable Fingerless Clown Gloves. It’s a great way to accessorize your clown costume. And what’s a clown without his accessories? 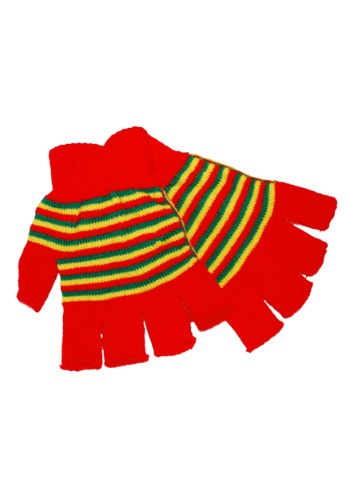 So, you have your bright red clown nose, your clown makeup, and even a pretty decent clown wig, but you’re still missing something to make this classic clown costume of your dreams a reality. Well, we think what may be missing, from your dream costume, is a pair of these fingerless gloves designed by clowns for clowns! These gloves will help to keep your hands warm while you clown around, as well as allowing you to perform all of your entertaining antics: creating balloon animals, squirting water into onlookers’ faces with an enticing flower, or juggling any number of odd objects! These gloves are made to fit over just about anyone’s hands and are designed with fun, bright colors, so they are sure to go well with any clown getup you have already started putting together! Now then, go to the nearest clown store in town and stock up on balloons (maybe even grab a unicycle!), get your goofy laugh down, and prepare to entertain everyone with your classic clown costume, made perfect with these Stripped Fingerless Clown Gloves! 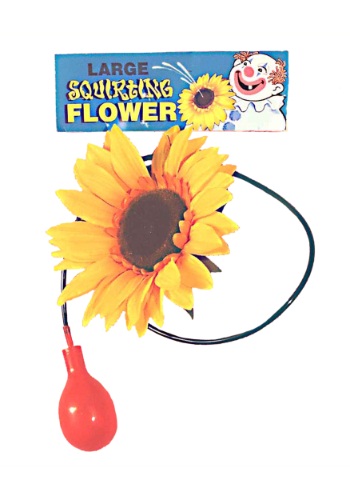 So you’ve just been admitted into clown university? In celebration, treat yourself to this Metal Clown Horn. It’s the most affordable way to celebrate your triumph! 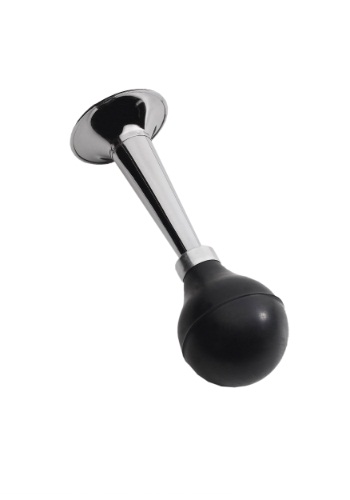 Planning on bringing the circus to town for Halloween this year? Perhaps you just want to clown around with some friends. Do you have high hopes of attending clown college? Well, before you can do any of that you need to make sure you have the perfect accessories for any circus clown. So, what does that all include? Hmmm. Well, if you ask us, every clown needs a bright red nose, a water-squirting flower, a colorful wig, and above all one of these amazing Metal Clown Horns!Put smiles on plenty of people’s faces when you give this bad boy a nice squeeze. HONK HONK HONK! You’ll be sure to catch plenty of people by surprise, and who doesn’t love a good surprise? Maybe this horn can serve as a distraction from an even bigger surprise, like a pie to the face! Classic! Grab your Metal Clown Horn today and let the clowning around begin.

When you wear our Plus Size Mime Costume, you won’t be able to speak, but that’s okay because you can instead act out everything you feel! Available in 2X/3X. 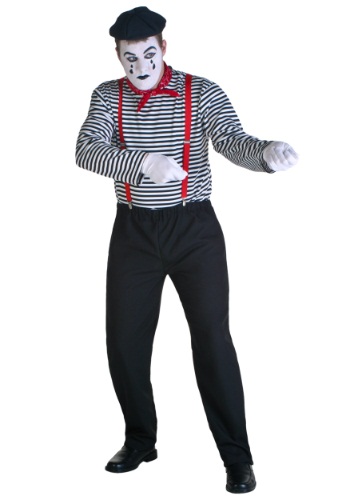 Your friends all think you are the epitome of the strong and silent type–you’re always a great listener, you always demonstrate your emotions through action, and you always–ALWAYS–look great in black and white. What your group doesn’t know, though, is that you are really working hard to hone your skills so you can quit your job and become a full-time mime. Cool!The art of miming actually goes all the way back to ancient Greece, and has quite a distinguished history. But then, you know all of that already, don’t you? We had no idea what a mime enthusiast you were! It seems only fitting then, that we present to you this Plus Size Mime Costume, just perfect for your act’s big debut or a Halloween bash. After all, you are the kind of person who can make silence speak volumes, so your look should do the same for you. And this one says, I’m a serious, studied mime who will now blow your mind with my miming skills!It really is amazing how authentic this costume looks when you pair it with the classic white mime makeup. You’ll look just like a famous silent movie star in the striped shirt and black pants. Or you can perfect your rope-pulling or wall-climbing skills in the skullcap and red accents. However you wear it, wherever you go, they say the first step to living your new life is to dress the part–so this ensemble is a must for you! We bet you’d squeal with joy…if it didn’t mean breaking character.

We’re not clowning around, these suspenders are the best! Use these rainbow clown suspenders for your next clown costume or for Halloween! 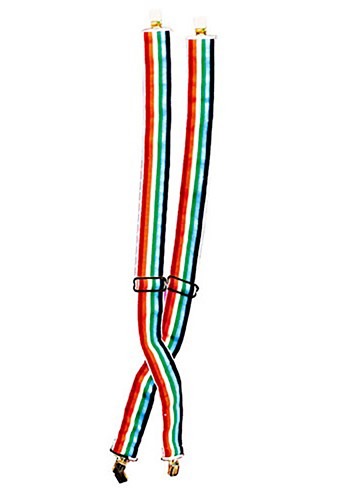 The rainbow. Wikipedia says it’s “an optical and meteorological phenomenon that is caused by reflection of light in water droplets in the Earth’s atmosphere, resulting in a spectrum of light appearing in the sky.” The capitalist says it’s a mid-range American retail apparel chain that sell trendy clothing. The music junkie says it’s a hard rock band from middle 70’s that was formed in California and made their home in Britain. The social progressive says it’s a sign of equality. But us? We think the rainbow is just a big pile of fun. You can’t stay mad at a rainbow. He’ll just make you smile again. The rainbow is the streaking color after the rain. A big smile from the earth telling you everything’s gonna be just fine. Now put that big earth smile onto a pair of suspenders and what do you have? Instant party. Instant good times. Instant fun. But you don’t have to thank us. We’re in the fun business. It’s our job. You’re welcome.