This Adult Deluxe Union Kepi Hat lets you look like an enlisted soldier in the American Civil War! 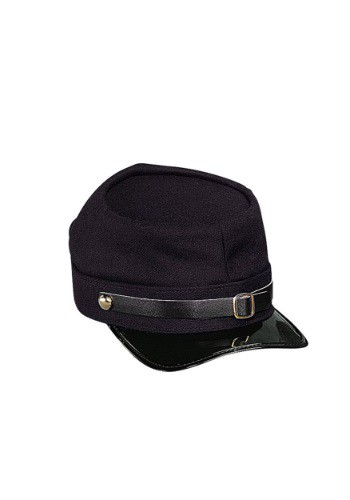 Having trouble thinking of what to do for Halloween this year? Why not kicking it old school? Like, way old school. We’re talking about over a 150 years old school. If you want to dress up as something memorable, then you’ve got to be historical! Take a look at this Adult Deluxe Union Kepi Hat. Throw it on to complete your Union Solider costume. Technically, since this Kepi has a black strand that would signify your rank as an Officer, and not just a common grunt. You’ll look ready to lead your troops onto the battlefield and keep a country united!Not only will your historical look stand out in the sea of monsters costumes but it will also remind people about one of the most trying times in America’s history. Whether you need the hat for a night of fun or an afternoon of serious reenactments this Kepi Hat will be the perfect accessory to top off your costume. Brush up on 19th-century trivia and get ready to teach everyone a thing or two about a historical event that has molded the world we know today.

Complete your Frederick Douglass costume from Early American history with this wig and goatee that features a black Afro with some gray hair. 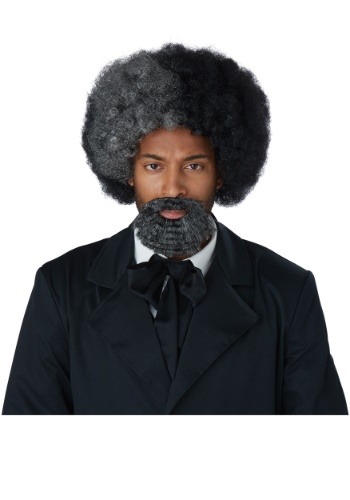 LUXURIOUS FAMEWhile Frederick Douglass certainly didn’t have anything even approaching a great early life, becoming the literal face of change is definitely something to help repair a past of many wrongs.  And, looking fantastic while moving the moment is only going to help change the tides! Naturally, his tasks and words are by far the greater force of Frederick Douglass’ memory, but none can deny that the wise, aged look of the African American writer, poet, orator, activist, and preacher help to keep him at the forefront of history!PRODUCT DETAILSChannel the look of the early American boat-rocker with this Frederick Douglass Wig and Goatee set.  The wig is styled as a large Afro with the perfect blend of dark, black hair and tinges of gray to give the authentic powerful but wise look that you’re going for.  The matching goatee somehow manages to heighten both!  The combo makes for a perfect historic look!INTIMIDATING AND COMFORTINGThere’s just something that is both welcoming and frightening about the image of the powerful preacher with an amazing Afro.  There’s a reason that it has become a trope in all our favorite media.  Well, Frederick Douglass remains the inspiration for all of them and you can channel that same take-no-nonsense wisdom with this wig and goatee!

This is a Women’s Harriet Tubman Costume from the Early American history that features a long colonial dress with white neck scarf. 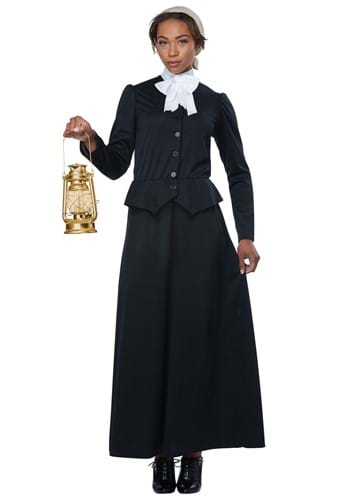 A True Hero Let others have their superhero costumes this Halloween, you’d prefer to pay your respect to a real historical heavyweight, Harriet Tubman! Tubman wasn’t just a fierce abolitionist and suffragette, but she risked her life and safety to help hundreds of others escape to freedom (not to mention, she’s the soon-to-be face of the $20 bill!). So, while your pals’ costumes may come with capes, light up and make noise, or give them instant, undeniable 6-packs, your costume will imbue you with the actual might of a real-life superhero! Whether you choose to wear our Harriet Tubman Adult Costume for a theater performance, historical reenactment, or simply to capture your love of history this Halloween, we’re certain you’ll feel fantastic about your choice! Harriet Tubman was one amazing lady, but then again, so are you—take your respect to new levels by emulating your real-life role model. And leave the fancy flying and flashy antics to those others wannabe heroes!  Product DetailsThis ensemble is styled in line with the times—simple and sturdy. It’s a black, long dress with a basic peplum, front buttons, and long sleeves. The neck scarf adds period-specific flair and lightens the stark appearance, and the head kerchief completes the look.  Grab a lantern accessory to feel like a true beacon, or bring along your historical knowledge to share with other party guests. And don’t be fooled—the look may be understated, but the effect of seeing Harriet Tubman walk into a party is totally unforgettable!Conduct Yourself WellWearing this costume comes with a bit of responsibility—you should be on your best behavior! Harriet Tubman was the foremost conductor of the Underground Railroad, after all. You owe it to her to keep up a high standard all night in this costume!

This means war! This Adult Rebel Officer Costume is a unique historical-themed costume. 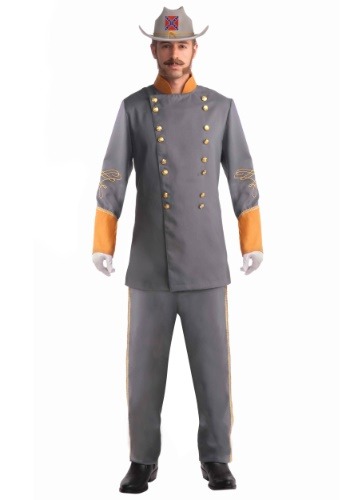 It’s great for any history fan looking for a unique costume! Pick up a hat and a toy gun as cool props!

Join your brothers in the American Civil War! Before you go, top off your uniform with this Union Officer Hat. 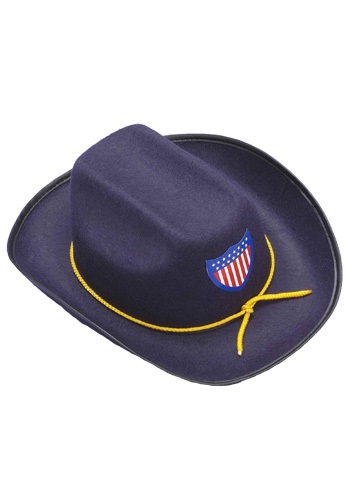 The opposing forces are closing in once again on the front! One of your scouts bursts into your tent warning you of the eminent danger. The rest of your fellow officers look at the map as they arrange the battle scene. You’ll soon be outflanked if you stay in this position, and there’s no hope of reinforcements arriving in time to aid you. “What do we do, commander?” One of your trusted officers asks. You think to yourself for a moment, weighing the options. You realize there’s only one way to create enough of a gap in such little time to outmaneuver the enemy infantry. “We must strike with a cavalry charge,” you say. You begin to prepare yourself to lead the effort and mount your horse.Before you leave, however, you make sure to don your trusty Union officer hat. It’s been with you through the entire war and kept you alive this long. It’s sure to inspire your troops through this fight as well. That or it just makes a really sweet top to your Union officer costume at the next party or reenactment.

This Child General Robert E. Lee Costume lets your kid reenact one of the most important wars in American History. 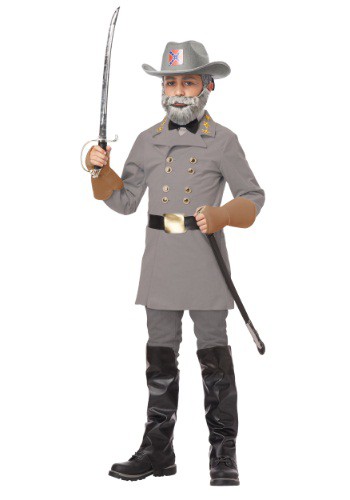 Your child isn’t just some everyday enlistee. He’s got honor, smarts, and we hear he secretly does a smooth southern accent like nobody’s business. That’s why we’d like to promote him to General for the next Civil War reenactment. This Child General Robert E. Lee Costume will give him the chance to show his mettle in the wake of a great war… the war against weekend boredom. He’ll learn all about history, making some good hardtack, the topography of Chickamauga, and how to trim and keep an excellent beard. See, whoever said that costumes can’t teach you anything never saw this Robert E. Lee costume!

Before you rush off to join the second pattern infantry, you’ll need a Union Kepi Hat and a Henry rifle. Stay battle ready with a civil war costume! Your reenactment group will love your authenticity and enthusiasm. 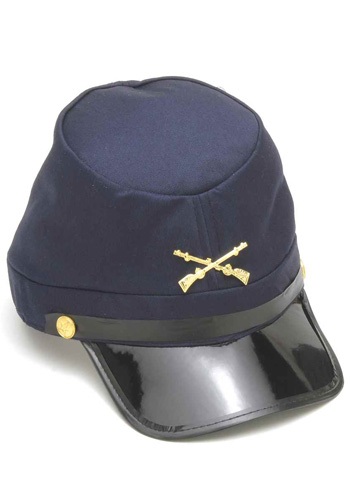 Look, you don’t pick a Civil War costume so you could just stand around and chat about the chips and dip all night, right? You’re doing stuff in your costume! Super cool stuff like battle reactants or fort tours or museum exhibits!So you’ve gotta have the kind of costume that can stand up the heat of one of the most documented wars in American history. The kind that says, “Hey. I have thick non-fiction books in my apartment that I have actually opened and probably even read. I have also watched some Civil War documentaries on Netflix. Come at me.” And that’s where this Union Kepi Hat comes in! A replica of the “McClellan Cap”, it’s suitable for recreating those famous American battle scenes. Carry a replica or an authentic Colt Army Model 1860 and you’ll be ready to assist your fellow soldiers and defend the Union on the battlefield!

It’s time to prepare for war, men…or just a war reenactment! This Adult Union Officer Costume is a great historical-themed costume for men. 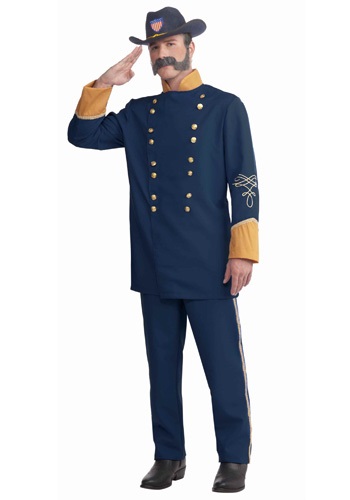 We know what you’re thinking…you’re thinking that it’s time to talk about the fact that the real cause of the Civil War was due to seven Southern states saying, “Yo, I think we should break up” and the North responding to their late-night text with a big “LOL NO”…and so they went to war and it was a huge thing, and then after it was over and everyone gathered at the after-the-final-shot reunion show, everyone else involved was all, “No, the REAL reason why you fought was because of A, B, and C”. To which the North and South both responded with a “Kind of but not really, here are the receipts so don’t get it twisted, and also, can we live?” Which, obviously, was answered with a resounding “nah”, and so here we are, still debating each other about the real cause of the Civil War.So, like…get ready for more historical discussion about that when you wear this Adult Union Costume!Because, honestly, it’s not like you would pick a Civil War costume so you could just stand around and chat about the chips and dip all night, right? You obviously know some history, and maybe even care about its legacy, and so donning a costume like this is the perfect way to say, “Hey. I have thick non-fiction books in my apartment that I have actually opened and probably even read. Come at me.” It even comes with foam shoulder pads, so people will only have to take one look at you as you march into the room to know that, when it comes to the state of the union, you mean business…but then they’ll also notice those gold-tone buttons and dapper sleeve detail and see that you know how to draw the battle lines when it’s time to party. So prepare your troops and show ’em how it’s done. It’s war, boys!