This Child Breakfast at Tiffany’s Holly Golightly Costume is an officially licensed costume from the classic Audrey Hepburn movie. 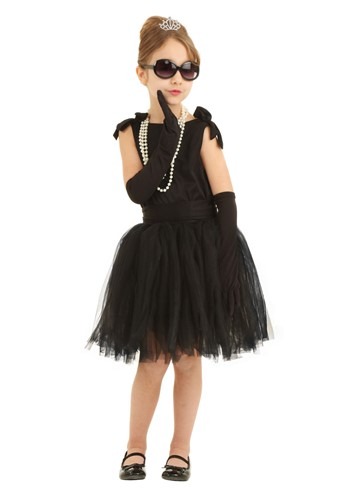 For the kid who has a love of classic Hollywood films, there may be no bigger and more beloved icon than Audrey Hepburn (heck, that applies to movie nuts of all ages!). But one character she played, in particular, stands out above all the rest, and rivals any other screen legend in any decade. Naturally, we’re talking about none other than Ms. Holly Golightly from “Breakfast at Tiffany’s”! Who doesn’t know that sparkling tiara, the black dress, the pearls, and the black satin elbow-length gloves? That’s why your daughter will be absolutely recognizable as a rising star in this child Breakfast at Tiffany’s Holly Golightly costume!Made by us, this exclusive and officially licensed outfit has everything she needs for an instantaneous transformation into Hepburn’s most legendary role. It includes a casual but fancy-looking black tank dress that slips right on (because someone named “Golightly” shouldn’t have to spend hours fussing with a complicated costume!). A black waist sash adds that bit of sophistication and class, and yes, those long elbow gloves are included as well! The costume even comes with a pair of cat-eyed sunglasses that capture the look and style of the ones Hepburn wore in the movie. Your kid is sure to steal the show in our wonderful child Breakfast at Tiffany’s Holly Golightly Costume. Just don’t forget to add the tiara (which we happen to sell!), and if you’re going for a movie-themed group costume this Halloween, check out our wide selection of cinema-inspired costumes and accessories!

This Toddler Breakfast at Tiffany’s Holly Golightly Costume will transform your little girl into a glamorous New York socialite. 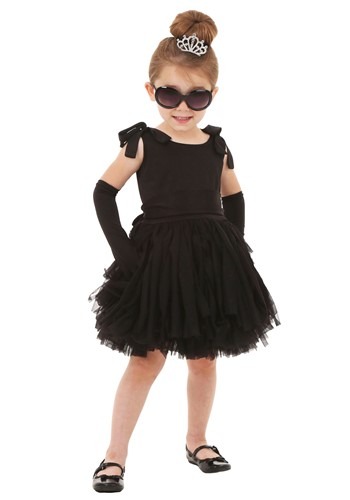 You can’t give your heart to a wild thing: the more you do, the stronger they get. Until they’re strong enough to run into the woods. Or fly into a tree. Then a taller tree. Then the sky. If you let yourself love a wild thing…you’ll end up looking at the sky.Truman Capote wrote very few things that could inspire a toddler’s Halloween costume. We toyed with the notion of making costumes themed after In Cold Blood, but we ultimately thought better of it. Thankfully we have Breakfast at Tiffany’s, a heart wrenching story that was adapted into an Academy Award winning picture in 1961.Of course, the movie may as well have been titled “Audrey Hepburn in a Black Dress for 114 minutes.” Her portrayal of the lithe runaway from Tulip, Texas still captures hearts and imaginations, simply one of the most beautiful actresses to play one of the most captivating characters in movie history.Your little girl may not be old enough to appreciate some of the subtle nuances of Breakfast at Tiffany’s. In fact, she’s probably still learning the subtle nuances of actual breakfast (the trick is to keep the Cheerios from falling on the floor). But we bet she knows what style is, and that’s what this costume has in spades. Reincarnate your little tot as Holly Golightly from head to toe in this dress, sash, and pair of long black gloves that came right out of the movie. And of course Holly wouldn’t be caught dead on the streets on Manhattan without a pair of big sunglasses! (You never know who you’re going to run into.)

Get together with your Huckleberry friend this Halloween while wearing this elegant Breakfast at Tiffany’s Holly Golightly Wig! 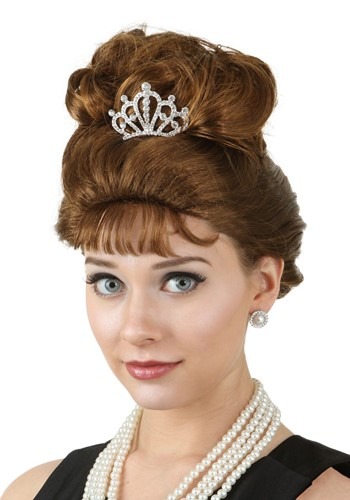 This wig goes really really well with our exclusive and licensed Breakfast at Tiffany’s costume dress. It completes the look! You know, when the industry heard we were making this costume they told us we could never do it, it could never be done, million to one shot, don’t even attempt such fantasy! Why? Because the elegance and beauty of Holly Golightly does not come so… well, lightly. But, we here at Halloweencostumes.com figured it out, and all you need are a few things and you’re ready to get out there and do some park avenue shopping, or perhaps sing some Moon River karaoke. For an encore you could sing that catchy (albeit mildly annoying) Deep Blue Something song from the 90s, it’s really up to you. But we recommend the classic. Always the classic.

You will definitely be the one who ‘stole’ the show when you wear this Vintage Hollywood Faux Mink Stole. 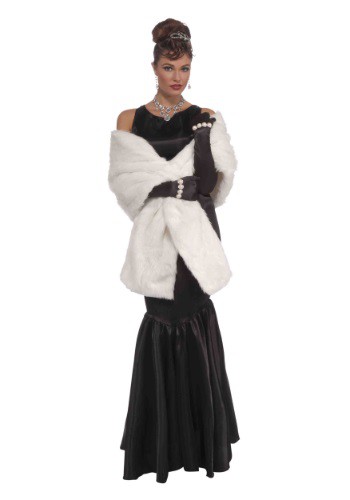 You’ve got a good idea of how to climb your way up society’s ladder. You’ve got grace and bearing. More importantly, you’ve got that ambitious drive. Who knows what’s waiting in the wings for a lady of your character, maybe you’ll even make it to the silver screen. One thing is for sure, you sure know how to dress the part. As we all know, grace can’t be learned, either you have it or you don’t. You were lucky enough to be born with it. A woman like you knows just how to wrap this gorgeous fur around yourself like a dramatic diva is supposed to. So, whether you are shopping at Tiffany’s or rubbing elbows at The Harmonic Club you’ll be dressed to impress when you pair your white fur stole with an elegant black gown and some tasteful jewels. Stick around long enough and you might catch the eye of that big time movie producer.

Add this exclusive Breakfast at Tiffany’s Crown accessory to your Holly Golightly costume. 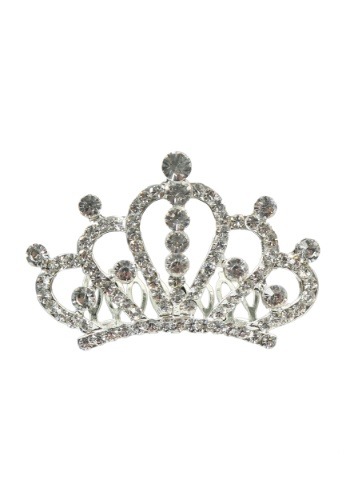 You’ve finally nailed the guitar and vocal parts for Moon River, and heck, you even memorized the entire Mean Reds speech. No one doubts you’ve got the style, grace, mystique and je ne sais quoi of Holly Golightly, but to truly transform into this iconic screen queen, you’ll need her crown. Because when you’re playing the role that made Audrey Hepburn one of Hollywood’s brightest stars, looking the part is an absolute must!Inspired by the shine and splendor of its onscreen counterpart, the exclusive, officially licensed Breakfast at Tiffany’s crown will transform you into one of cinema’s most memorable heroines. Combine that with Hepburn’s black cocktail dress (well, maybe not the actual one!), pearls, and elbow-length satin gloves, and it’ll be as if you jumped right off the Breakfast at Tiffany’s movie poster. Whether you want to include a tabby cat and one of those fancy cigarette-holders, well, that’s entirely up to you!

Watch out for paparazzi when your girl is rocking this Hollywood Diva Costume. She’ll be the star of the red carpet! 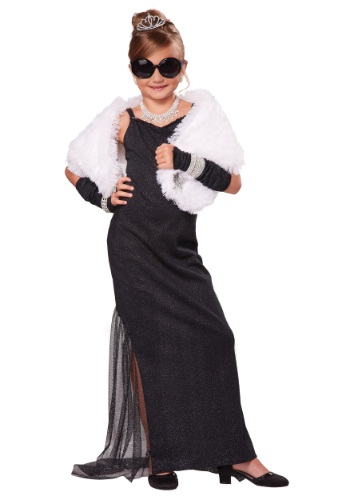 Oh, dahling I’ve just had the most wonderful day! I’ve dinned at Spago in Beverly Hills, and it was fantastic!Your little girl has always had expensive tastes. She likes her diamond tiara, and her silk bed sheets. She likes her coffee in the morning brought to her after 10am from a french press. She likes the latest gadgets, but mostly she loves her two floor walk in closet full of the trendiest styles.Okay, so maybe your daughter isn’t quite that over the top. But she still does like to look fancy, and she keeps asking for diamond earrings. Really she just enjoys looking like Audrey Hepburn whenever she can. She likes the way Audrey walks. The way she talks. She loves Audrey’s sassy nature, and the way she dresses. It is a special kind of classy that your daughter wants to become.This year she can live out some of her expensive tastes. She can put on this Girl’s Hollywood Diva Costume, and experience a life of luxury, and fame. She will be calling your kitchen table the Spago of Beverly Hills, and demanding her coffee be delivered to her on a silver platter. Or she will just be excited that she can dress up like her favorite Hollywood gal Audrey Hepburn. Wearing this black sparkly dress for a relaxing day out on the town. She wont even get a chill with the white faux fur stole wrapped around her shoulders. She might however continue to exclaim “Oh, dahling!” when she talks.